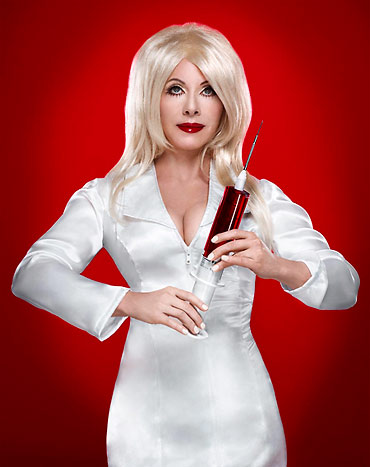 Here lies the unknown-yet-forgettable Black Klansman. It never fit into the theme of Invasion Of The B-Girls, but it was in such questionable taste that I had to include it. Suffice it to say, 1966’s The Black Klansman was a mistake by all concerned. No matter how well-intentioned, civil-rights activist/director Ted V. Mikels has left us with the moral equivalent of a Chia Pet. Even in the worst b-movies, you can always find a way to suspend disbelief. However, it is impossible to forget the fact that a full-on afro-sheened black dude is inducted into the Ku Klux Klan and no one seems to notice! The fact that no one would admit to knowing who wrote its kick-ass theme song, “Black Klansman,” was kind of funny but also a little sad because it deserves to be remembered. When I sang this song, the story of the Black Klansman insanely became my story, proving once again that emotions are not to be trusted.

Hunting down the renegade songwriters responsible for the material on Invasion Of The B-Girls proved to be an unexpected odyssey. A lot of them had died along the way—some, apparently, from embarrassment. We were dealing with now-defunct publishing companies and disbelieving heirs scattered across the country who had no idea what shady shenanigans their kooky artiste cousin twice removed had been up to out there in Hollywood Land.

To my amazement, no one had ever made a record devoted to theme songs from b-movies until Invasion Of The B-Girls. How could that be? There was a geek army of hardcore b-movie fans who knew much more than I would ever know, but fate had thrown me a grenade and I was going to run like hell with it. Did I lose fans doing this? Yes. Will I ever make back the money I spent? No. Was it worth it? Absofuckinglutely. This was my labor of love, harkening back to when I was a weird and socially challenged little girl. Godzilla, Mothra and aliens from Mars were personal friends of mine in this other world where I did fit in.

Long after I had moved to Hollywood, in between career mistakes, a late-night movie came on I had seen many times: Ghidorah, The Three-Headed Monster. As I sat watching this strangely familiar/otherworldly spectacle, a scene came on where the tiny twin priestesses who live in a flower invoke an indescribably haunting song to Mothra, a giant throbbing larva with massive furry wings and a forest of eyelashes that she periodically bats at the twins as they sing their sad, sad song. It suddenly struck me how amazing it would be to do an entire record of theme songs from b-movies. It was on! I ended up recording that initial song, “Shiawase Yobou,” in Japanese in a duet with myself. I later learned it meant “Why are you crying, Happiness?” That title is too beautiful for this world, much less this record.

The making of Invasion Of The B-Girls has been a journey I will never regret having taken, but it took more than 10 years to get this ebola-biting monkey off my back! When Invasion Of The B-Girls was rejected by Rhino Records all those years ago, they said it was too quirky; instead they wanted to make a pop record with me. But I was on a mission, and if they didn’t get it, then no one would. I literally put it on a shelf in my garage not knowing if it would ever have its moment in the sun, secretly terrified someone would snatch my retarded love child or just pluck it from the ether where ideas tend to gather synchronistically, if you are paying attention. Thankfully no one else was.

Sometimes events intercede in your life that at first seem untenable. Like when iTunes mistakenly gave the Go-Go’s credit for singing “Johnny, Are You Queer?” on 2007 compilation A Date With John Waters. After being notified of the mistake, John Waters contacted me immediately, expressing how terrible he felt. The extreme irony for me was that the release of Invasion Of The B-Girls was only weeks away, and the theme song from Waters’ Female Trouble happened to be featured on it. I very timidly asked if I could send him a copy of my new CD, and he agreed. When he told me how much he had enjoyed it, I instantly became the personification of a Summer’s Eve commercial, running in slow motion and all tingly inside. A few days later came the halting email that Waters was very upset about “Female Trouble” being on my record. (Apparently he hadn’t listened all the way to the end of my CD.) So began a months-long correspondence involving lawyers, copyright laws, back-and-forth discussions about who can record what and when after a theme song has been on a soundtrack, etc. Waters had successfully stopped and/or sued every tiara-mangled drag queen from Wigstock to Fire Island who had tried to put that song out. Forget that we had produced the sickest, pimped-out ’70s-funk version of “Female Trouble” with wah wahs up the yin yang by the never properly acknowledged guitar guru Geza X and the goddamn Tower Of Power on horns. Forget that it had become the big show-stopper in my live performances. I had to find and record another song, acquire the publishing rights, remaster, redo all the artwork and push back the release date. Life was now a giant wood chipper grinding my riddled brain for its own amusement. I was simply crushed. This couldn’t be happening!

In Waters’ final email to me, he said he was sure I wouldn’t like him anymore after what he was about to say: He just couldn’t allow me to put “Female Trouble” on my record. He had plans to release a compilation of Divine’s songs and was convinced my version of “Female Trouble” would be in direct competition with Divine’s. He told me of all his favorite singers, he would want me to be the one to put it out. I was flattered and flatlining all at the same time. More than anything, he was devoted to preserving Divine’s legacy, and if he gave me permission to release it, then anyone could legally record it. I explained to him that I could never hate him. It was impossible. He had been a huge influence in my life. That even if he hadn’t known it, he had written a song for all the fucked-up girls in the world. That it had made me brave. I thanked him for writing such an inspiring song. When I first started singing “Female Trouble” on stage a few years before, that fractured part of myself was unearthed before thousands of people. “Look at me. I’m one messed-up bitch. I will chew this umbilical chord with my bare teeth.” I owned it now. It had gone full circle. That’s how John Waters came to write my liner notes, unasked, and that alone has made all this worth it.

I hope I have paid tribute to something that will be remembered fondly, laughed over and played at limbo parties. I seriously doubt that much sex will be had with “Green Slime” sloshing in the background. If you find all this just too shallow, too devoid of meaning, if it’s not serious enough for your dark and probing mind, I assure you with some expertise that real superficiality runs especially deep—when excavated properly. And if anyone slightly Asian-looking happens to quiz you over some legal matters regarding myself and Godzilla, tell them yes, Josie has permission, via capitalism, to use his unmistakable roar that will always be fading into the distance, as my old friend tramples Tokyo, looking back over his shoulder one last time. Goodbye, Godzilla.

And so we bid farewell to Josie Cotton’s week of b-movie madness at magnetmagazine.com. Thanks to Josie for introducing us to badass girl biker gangs, the forgotten (with good reason) saga of the Black Klansman and the gentler side of Mothra.