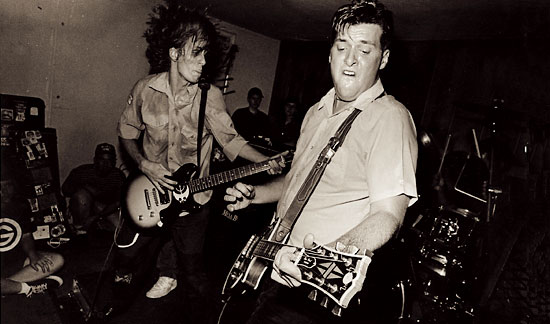 :: DRIVE LIKE JEHU
Yank Crime // Interscope, 1994
In 1991, the self-titled debut from Drive Like Jehu was passed around the alt-rock cognoscenti like a talisman. The band’s principals—Rick Froberg and John Reis—hailed from San Diego semi-legends Pitchfork, and Jehu updated that band’s driving, post-Fugazi sound with a more complex approach. Drive Like Jehu struck a nerve and, for a minute or two at least, seemed like the most important band around. Until, of course, Reis’ other band (Rocket From The Crypt) erupted and prompted Interscope Records to offer ridiculous amounts of money to RFTC and Jehu for signing on the dotted line. Yank Crime was the band’s sophomore effort, major-label debut and swan song, an explosive tangle of careening tempo changes, hoarse-throat vocals, barely contained guitar histrionics and mindful aggression. Its appearance on a major label’s roster was as mind-boggling then as it is nostalgically naive now. Of course, Yank Crime, along with RFTC’s three major-label outings, proved to be money pits for Interscope.

Catching Up: Undeterred by label indifference and the demise of Jehu, Reis persevered with Rocket From The Crypt and, in 1999, re-teamed with Froberg in Hot Snakes (a.k.a. The Best Side Project Ever). Froberg moved to New York to work in visual arts; he’s now in Obits, which just released their debut on Sub Pop. Drummer Mark Trombino produces and engineers bands. Bassist Mike Kennedy played in Corrugated. In 2005, Reis disbanded RFTC in order to focus on his record label, Swami; he briefly fronted Sultans and now leads the Night Marchers.

How is this a “Lost Classic?” Not to sound rude or anything, but it’s anything but. Maybe if you had offered up their S/T album instead, I could see that, but Yank Crime? No way…..

Yeah this band isnt lost theyre still selling there self titled and yank crim was even repressed a bunch of times. You even said this band was important around its time how are there records lost? As much as I love the band they are pretty well known in the independent and DIY section of music especially among 90’s emotive hardcore fans. Lost music is like Allure’s Demo tape, Guyver one s/t 7″, Kolya Iditarod 7″. Like I said Drive like jehu’s music is still available