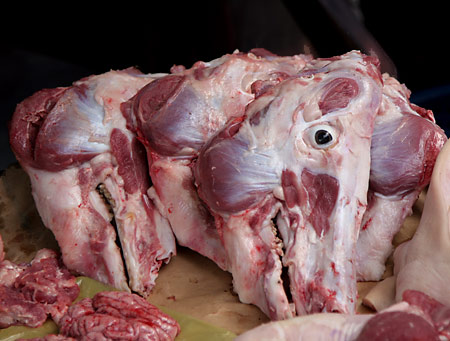 I have always been the adventurous type, looking for the exotic, the succulent, the challenge of the bizarre, especially in food. This led to such things as eating enormous (almost) cockroaches—deep fried but not all the way through—in Thailand and a hapless snail about the size of my fist—pulled off the wall of the tank, sliced and served, still writhing in pieces—in Japan. I’m always pleased to find a taqueria off the beaten path with new bits in to add to the mix. And in France, I have truly found my home.

The French are like snobby eskimos; not only do they have no problem wearing fur, but they also make sure not one cubic centimeter of any animal is wasted. Everything is up for grabs. In September, the shotguns ring out in the countryside and, it should be noted, the stray cats all disappear. Not just game animals are harvested. Everywhere you go, someone is raking the beach for clams; bashing tiny oysters open directly on the rocks with a hammer, squirting in lemon and scooping them up with their fingers; following a snuffling beagle searching for truffles; bringing incredible varieties of mushrooms into the local pharmacy for identification. The French are still hunter-gatherers. My mother-in-law seems to gather plastic grocery sacks. You never know.

Since living here, I’ve discovered:
Boudin noir: blood sausage, not crackled and fried like British pudding or Spanish morcilla; this is soft and cool and deep crimson, not black.
Oreille, groin, pied de cochon: the ear, snout and foot of pig, respectively; they are essentially cured like bacon, and the ear has a crunchy cartilage center and (often) hairs sticking out of it.
Salade de gesiers: Yep, salad with chicken/duck gizzards on top.

Of course I knew about tripe, but recently I had it on couscous, at a place next door the Élysée Montmartre, before going in to see video-game-metal experts Dragonforce. I’m also fond of rognon (kidneys), ris de veau (sweetbreads, which are not the brain, as I grew up thinking, but actually thymus and pancreas of veal) and boiled cow tongue (a winter favorite).

I’ve yet to try:
Sanguette: essentially an omelet made with chicken or duck blood instead of egg. I haven’t found a restaurant serving it, but trust me, somewhere, one exists.
Miot/millot/mieau: I don’t even know how to spell it, but my mother-in-law’s boyfriend will occasionally start the day with this French breakfast that seems devised by Homer Simpson, the master of cutting to the chase. You place in a bowl the following: stale bread, cubed; two or three glasses of yesterday’s expired red wine; two to four tablespoons of sugar. You stir a bit and eat with a spoon like Special K. Like, every wrong thing, right? And the guy is 80 and can take a full-force karate kick to the gut from my daughter and laugh about it.