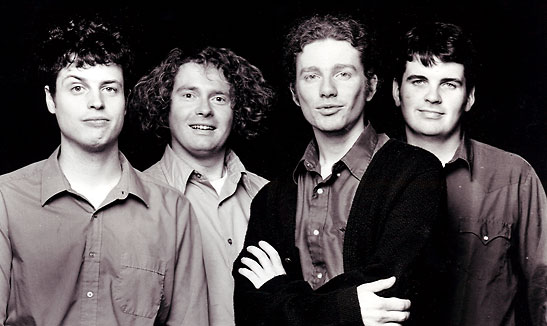 As the New Pornographers’ critically acclaimed catalog makes obvious, Carl Newman is a sucker for ’60s AM-radio pop and ’70s FM-radio pomp. And he always has been—except that a little more than a decade ago, he segregated these twin affinities to vastly different bands. He first arrived as the singer and one of six guitarists for Superconductor, a messy amalgamation of Vancouver scenesters who released two albums of prog-metal mayhem that were endorsed by Robert Pollard and pretty much no one else. (Superconductor was nonetheless prescient in its anticipation of the now de rigeur Canadian indie-collective template.) With his concurrent other band, Zumpano (pictured), Newman stepped out from behind Superconductor’s thundercloud of noise and laid bare his fondness for the Beatles/Bacharach songbooks, a move that was so antithetical to prevailing lo-fi aesthetics that Zumpano was initially characterized as a latecomer to the dying lounge-core party.

:: ZUMPANO
Look What The Rookie Did // Sub Pop, 1995
If this sounds like a retro artifact, it’s only because its best songs (“The Party Rages On,” “Temptation Summary,” “I Dig You”) were on par with the Brill Building breezy-listening pop that inspired them, possessing the sort of pristine, heartfelt, melancholy melodies that were all but banished from the airwaves by 1995. To paraphrase one of the group’s heroes, Zumpano just wasn’t made for its time, but the superior songcraft on Look What The Rookie Did drew a direct line to Newman’s future as a New Pornographer. (Well, that and the fact the album title came from a gay skin flick.)

Catching Up: Zumpano’s second album, 1996’s Goin’ Thru Changes, would be its last. Anyone who’s read MAGNET in the past 10 years knows where Newman went next. However, let’s not forget the man who gave the quartet its name: drummer Jason Zumpano, who plays with Sparrow and Attics And Cellars.

“The Party Rages On”: