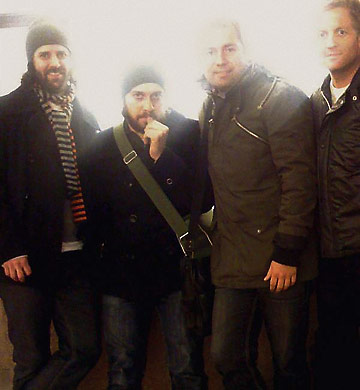 Stringfellow: A good representative of the gentle, dreamy kind of indie pop that Norway specializes in. Norwegians really love Americana (like Wilco’s earlier, funnier films) and Britpop. And black metal. And catchy synth pop with astoundingly high chorus hooks. Put that together, and you get many bands who like organic sounds (Wilco) and reverb (Doves-style U.K. pop) and can really play (the metal discipline) and know their way around a melody. (Try not to think of “Take On Me” for the rest of today, now that I’ve mentioned it.) I would say Human Heat are the best of the new crowd, but you have their ragged cousin Hiawata!, their uncle Kenneth Ishak (who produces many of these bands and is a great songwriter himself) and his band Beezewax (I produced one of their albums) and their upstart siblings I Was A King. All worth getting records by.

That Human Heat song is actually a cover of a Hiawata! song.
It was one 9(!!) b-sides to the new and FREE Hiawata! single Valley Boys.
Download it here:
http://sellout-music.net/hiawata-valley_boys.zip