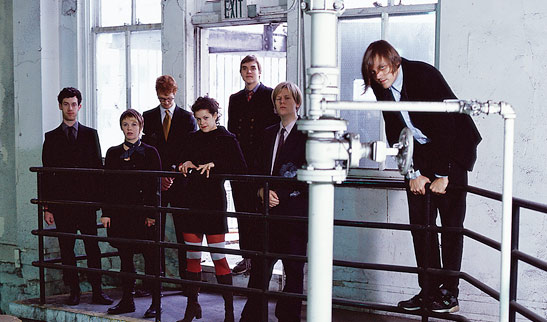 Merge Records, the North Carolina-based label built by Superchunk, sustained by Neutral Milk Hotel and Magnetic Fields, and made mega by Arcade Fire (pictured) and Spoon, turns 20 this year. In honor of the anniversary, MAGNET presents the five most overrated and five most underrated items in the Merge catalog. It’s our weird, judgmental way of saying happy birthday.

The Five Most Overrated Merge Albums:
1. Spoon Kill The Moonlight (2002)
Let’s take the opportunity with this first entry to put a fine point on the word “overrated,” lest we offend Britt Daniel. (Thanks to our Robert Pollard Over/Under, the ex-GBV frontman isn’t even talking to us anymore.) “Overrated” is a relative—not absolute—measure of quality. It only means the album in question is held in higher regard than it ought to be. Spoon’s third album is a pleasure, but its status as the band’s breakthrough recording is largely due to what I call the Sasha Frere-Jones Effect: mainstream critics miss the boat on an indie-rock masterpiece—in this case, 2001’s superior Girls Can Tell—and blindly hail its successor with all their might. (See also: The National’s Boxer, Cat Power’s The Greatest, Neko Case’s Middle Cyclone, the Hold Steady post-Separation Sunday.) The bedroom-y quaintness of Moonlight—the persistence of tambourines, dinky keyboards and beat-box percussion—might’ve rocked first-generation iPods, but the overall effect is simply too pocket-sized to fill out Daniel’s capabilities: the guitar-rock pyrotechnics previously heard on A Series Of Sneaks or the widescreen funk later heard on Gimme Fiction. Standout track “The Way We Get By” only slightly redeems the fifth-best Spoon album, ranked just above 1996 debut Telephono.

2. Magnetic Fields 69 Love Songs (1999)
The easy argument against Stephin Merritt’s 69-track triple-CD release is that it’s just too much, a nobody-can-eat-50-eggs test of indie-pop willpower. These 69 songs actually fly by quickly enough, but the ratio of good-to-bad is perilously low to the ground. For every “All My Little Words,” “I Think I Need A New Heart” or “Papa Was A Rodeo,” there are about 10 songs such as “Love Is Like Jazz.” What, you don’t remember “Love Is Like Jazz”?

3. Arcade Fire Funeral (2004)
You knew either this or Neutral Milk Hotel’s In The Aeroplane Over The Sea would turn up on the overrated list, right? Not to say that Jeff Mangum is Mr. Subtlety, but bombast tends to age poorly, and Funeral is a bombastic orchestral-rock album that bowled over U2 fans who believe a little sonic window dressing makes something sound “grand” or “eloquent.” Ask the Polyphonic Spree how the theatrically induced rock lifestyle is going these days. Funeral follow-up Neon Bible is even more overrated from a commercial standpoint (it’s Merge’s best-selling album of all-time), but that kind of logic isn’t allowed here.

4. She & Him Volume One (2008)
Zooey Deschanel, when you record and release an album and your musical high-water mark is still the shower scene in Elf, things are not good. M. Ward, when you abandon every ounce of your original style (badass John Fahey fingerpicking, warbly prewar production, lots of other nerdy guitar/studio tendencies), it just gets worse. She & Him may have been a sweetheart pairing for magazine covers and NPR interviews, but the actual music is revoltingly bland. The worst thing about Volume One is the implied threat of a Volume Two.

“Why Do You Let Me Stay Here”:

5. Polvo Today’s Active Lifestyles (1993)
The atonal tendencies and laborious structural exercises of math rock are so yesteryear that it’s difficult to view bands like Polvo as anything but a reaction to increasingly cookie-cutter ‘90s alt-rock. Polvo deserves credit for discovering interesting new guitar sounds (such explorations were typically reserved for Sonic Youth), but it’s too stingy with the hooks. When the math-rock revival happens in 2014, history may prove Polvo to be proud conquistadors; in the meantime, a journey with Today’s Active Lifestyles is about as fun and adventurous as the New Jersey Turnpike.

The Five Most Underrated Merge Albums
1. Portastatic De Mel, De Melão (2000)
Around the turn of the century, everyone seemed to be dosing on the ‘60s Brazilian acid-pop movement known as Tropicalia. Beck based a whole album on its breezy rhythms (Mutations) and Portastatic (a.k.a. Mac McCaughan, also Superchunk’s frontman and Merge’s co-owner) paid homage with this five-track EP of covers of songs made famous by Gilberto Gil, Os Mutantes and Caetano Veloso. While a gringo like McCaughan may never achieve the percussive trippiness of original-issue Tropicalia, his electric guitar runs forward and backward in hot pursuit of the music’s trippiest moments.

2. Tenement Halls Knitting Needles & Bicycle Bells (2005)
Back in January, magnetmagazine.com guest editor Carl Newman sung the praises of unheralded Merge act the Rock*A*Teens. That band’s frontman, Chris Lopez, went on to record a ragged album under the name Tenement Halls. Knitting Needles sounds like a record made by a guy who can’t stand up because he’s always falling down, a woozy and near-carnivalesque journey to a midlife waking dream of disappointment and lost love. Somebody should check on Lopez to make sure he’s OK out there in his own private Nebraska.

3. Shark Quest Man On Stilts (2000)
Every instrumental rock band is, at some point, compared to film music. Chapel Hill, N.C.’s guitar-happy Shark Quest is no exception, but at least it keeps you guessing as to which genre you’re in. Man On Stilts sounds like the score to a Japanese-filmed spaghetti Western dubbed into Italian, then English, then back into Italian with French subtitles, then handed over to Steve Vai, who is forced to play a banjo with a pickup that’s run through a tremolo pedal that is hooked up to an espresso machine and a bug zapper.

4. The Essex Green Cannibal Sea (2006)
For a band based in Brooklyn, the Essex Green is awfully adept at conjuring rolling hills, gentle streams and other nature-imagery cliches that us city shut-ins don’t know anything about. Maybe the world was tired of starry-eyed Elephant 6-ish folk pop and skip-along ‘60s innocence. Maybe we all forgot how to enjoy duck ponds, soap bubbles and the sound of children laughing.

5. Ganger Hammock Style (1998)
Two things set this now-defunct Glasgow outfit apart from other post-rock bands of the era: 1) It featured real live females among its members, and 2) its fun, rhythmically propulsive music was an antidote to the dour jazzbo noodling of its Midwestern peers. Read more about Ganger’s Lost Classic album.

11 replies on “The Over/Under: Merge Records”

I always thought Girls Can Tell was the overrated one, and A Series of Sneaks was the underrated one.

Spoon…snore. Did anyone else think that their last album sounded like Billy Joel?

Polvo’s “Today’s Active Lifestyles” was one of the best albums of the 90s. You should have posted “Sure Shot” or “Tilebreaker” and then tell me that Polvo were simply “reactionary.” The song you posted, “My Kimono” is more interesting musically than the majority of hipster indie rock being produced today, and the song doesn’t even have vocals.

Hey Magnet, are you owned by Pitchfork now?

The extent to which “Funeral” may be overrated is nothing compared to how much Magnet underrated it when it came out.
And even if I usually write to disagree, I love you ladies and gentleman for being willing to actually HAVE an opinion.
Peace out.

what the hell ever happened to them?

Seriously……69 Love Songs is overrated but that unlistenable piece of dreck released by TNV is nowhere to be found? If you can find 10 clunkers per every gem on 69, please give me these lists, for they will be wrong, and I will mock you. Maybe you just want to be a provocateur by placing Spoon and Magnetic Fields on your overrated list. I’ll go along with Arcade Fire and She & Him, however. I just wanted to vent about the soul-crushing experience of listening to TNV again, really.

Also, I renewed my subscription in December and have one magazine to show for it. Are you moving to a semi-annual distribution model?

I was way into the first Matt Suggs album, Golden Days Before They End.

Glad someone else made the Spoon – Billy Joel connection.