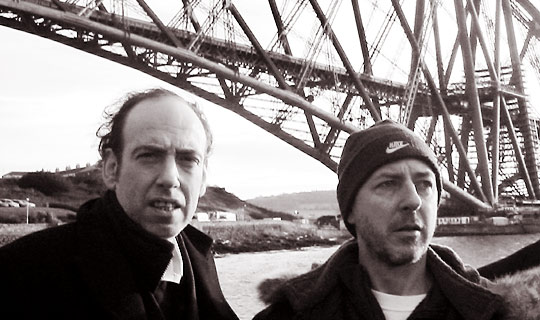 We present to you a playful, genre-bending musical duo, much like ourselves, who are very, very dear to our hearts. Much like ourselves! Carbon/Silicon is Mick Jones (from the legendary Clash and Big Audio Dynamite) and Tony James (from Generation X and Sigue Sigue Sputnik). I know—incredible, right? Violet has long admired the realism of Jones’ vocal stylings. You can tell when he’s jumping up and down or tapping his foot while singing. The way it joggles his voice, it’s so visceral. James majored in math and computing in college. A confindent bassist (he created the “space bass” sound in Sigue Sigue), James has dallied on the fringes of pop punk for a few decades now.

What make these heroes heroic is that, for all their combined age and experience, the music and the methods of creation are neither jaded nor humorless, nor rooted in past glories. The premise of this band is to embrace, rather than fight, the eminence of the Internet, which is in direct contradiction to the fear and denial of the record labels, who still think they’re fighting the good fight against illegal downloading. Carbon/Silicon make rock music, but they’re making it on their laptops; they release many of their projects as digital-download only; they engage in file sharing; they sample. And their stance on illegal downloading? You can get it all for free from their website! Jones and James aren’t in it for the money.

Carbon/Silicon lyrics often have political overtones, I can’t lie. It’s clear that Jones is disillusioned and feels politically disenfranchised at times, but he expresses these feelings in ways that are both though-provoking and drenched in wit. And the massively catchy “The News” from 2007’s The Last Post exudes a surprisingly youthful air of utopian idealism. What Carbon/Silicon song are Grand Duchy listening to right now? An epic eight-minute, 45-second song based on the science-fiction novel Snow Crash entitled “Buckethead.”

P.S. Black Franics has been a huge Mick Jones fan for years and would be thrilled to have him—or the full Carbon/Silcon duo—produce a Grand Duchy record.