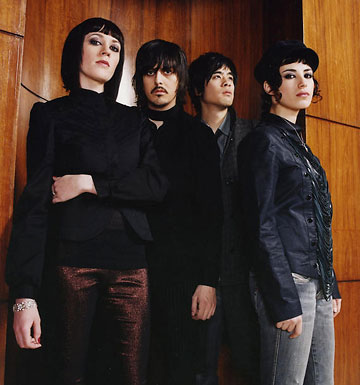 Before Ladytron (pictured) came onstage at the Trocadero in Philadelphia on Monday night, I mauled a random kid for a handful of glowsticks, claiming they carry special powers that give me confidence in my dancing ability. A few minutes later, I spotted Jared. Jared had bracelets up to his elbows, a tight, sleeveless turquoise shirt, eyeliner and lip liner and stars tattooed on his face. I immediately ran up to him and handed him my glowsticks.

“Hey, you look like you could use these,” I insisted.

My motive was somewhat selfish, because I was hoping he’d bust out in some crazy figure-eight light show when Ladytron started playing. No such luck. However, the rest of the crowd was eager to get their dance on the minute they stepped in the door. They probably didn’t even need the Faint or Ladytron, judging from the pockets of sweaty bodies bumbling around between sets.

Ladytron, an electro-rock quartet from Europe, upped the ante. Possessing the same intense, androgynous sex appeal as Karen O and Annie Lennox, frontwomen Helen Marnie and Mira Aroyo juxtaposed their fluttering vocals with thumping dance beats as they keyed away on antediluvian synths. While the Faint took what seemed like an inordinate amount of time setting up, the energy buildup among the masses was almost tangible. I chewed impatiently on my glowstick. When Todd Fink and the gang finally appeared, it was sweet sensory overload. Video clips of crowds and faces that flashed in the background, billowing smoke, flickering strobe lights and the gangly dancing of the keyboardist made me grateful that I wasn’t: a) on ecstasy, or b) suffering from a latent neurological disorder. Their heavy drum and bass collided with blippy keyboard melodies that inspired my body to flail in an uncoordinated fashion, unable to decide whether to mosh or rave. The Faint played about half the songs from underachieving 2008 album Fasciination but made up for it in the encore with three classics, including “I Disappear.” Plus, you know, I got glowsticks.

The Faint’s “The Geeks Were Right (Does It Offend You, Yeah? Remix)” (download):
https://magnetmagazine.com/audio/TheGeeksWereRightDoesItOffendYouYeahRemix.mp3