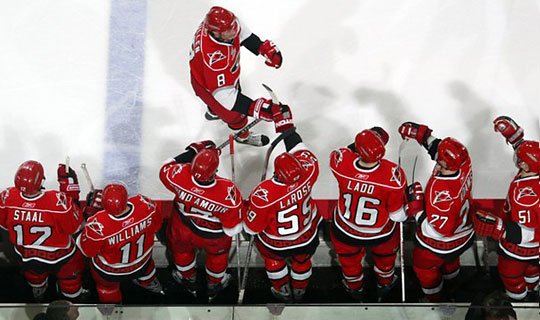 McCaughan: Only if you don’t follow sports will you find it hard to imagine that an ice-hockey team based in North Carolina gets no respect from the rest of the league, probably even in such hockey bastions as freaking San Jose, Calif., and Phoenix, Ariz. But you know what? Fuck those people, because we have the Carolina Hurricanes and won Lord Stanley’s Cup more recently than every other team in the NHL except two. Seeing ice hockey in person will make you into a fan, and so will watching the US of A beat the USSofR in the Olympics when you’re 12 years old, which I did. So here I am with season tickets. Game seven of the 2006 finals series against the Oilers when the ‘Canes won the Cup was the greatest sports-related thing I’ve ever been to; they even let me talk about it on TV once sitting next to Cam Ward and Rod Brind’Amour. It was insane, and guess what? The ‘Canes are back in the playoffs and underdogs to everyone as they were three years ago. We all know what happened then.

2 replies on “From The Desk Of Mac McCaughan: Carolina Hurricanes”

I’m a Toronto boy, so I need surrogate (read “real”) hockey team to root for. The Canes are young, fun, and well coached, with a smattering of veterans that always go beyond the call of duty at this time of year. Interesting sidebar…. their coach Paul Mauric was run out of Toronto after a few years of the Leafs missing the playoffs. The same “experts” the habitually slagged him are now saying “He’s pretty good, we should get him!!” Ahhh… hindsite.