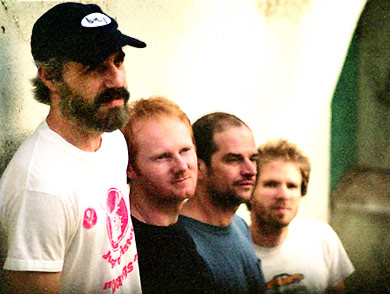 Lowery: Ross Shapiro of the Glands is one of my favorite songwriters of the last two decades, but he is also my local CD-shop manager. This makes my relationship with him somewhat complex. I try not to be the adoring fan, because he really genuinely does not care. And for his part, he never misses the opportunity to play one of the record-store clerks from High Fidelity.

Example one: The last time I was in Schoolkids Records, I noticed they were playing some pop-rock record from my youth. A record for which I still have a lot of fondness. I asked, “Are you guys listening to the Eagles?” “Yes,” Ross answered. “On purpose?” I asked. “Not ironically?” “Don’t be an ass,” he said. Ross told me not to be an ass! Do you know how hilarious that is to anyone from Athens, Ga., who regulary shops at Schoolkids Records? See, I know what I said sounded kind of bitchy, but I just wanted to make sure I wasn’t being set up, because I was gonna confess my fondness for this particular record.

Example two: My girlfriend is the talent buyer for the 40 Watt Club. One day, we stopped by Schoolkids to check on ticket sales for a show that wasn’t doing well. After doing so with Ross, she became concerned she was gonna lose a lot of money. “I may be looking for a job soon,” she said. “Are you hiring, Ross?” “That depends,” he said. “What are your skills?” “I am a people person,” she replied. “We don’t hire people persons,” he said. Of course, this is why we all like Ross, and this is why we continue to shop at Schoolkids Records. He’s written so many great songs. It’s a shame that he has never enjoyed the success that many of his like-minded brethren (i.e., the Shins) have enjoyed.

6 replies on “From The Desk Of David Lowery: The Glands’ Ross Shapiro”

I HATE the fucking Eagles!

i’m not sure ross would like being compared to a clerk from high fidelity…just a guess. but you gotta love you some shapiro. lord loves a working man.

there’s always room for a ross in this world. don’t ever let a baseball land in his yard. i only hope the glands get back together soon….hey ross, so get with it.

when i’m in town, i like to go into the store and be nice just to piss him off.

Ross holds everyone to the standard of not getting a break.
He’s demonized by those who get one or a hundred.
It’s like a reunion, when you see Ross and converse,
it’s like Rutherford discovering electrons, there’s a plum pudding model, there’s something new and functional
but there’s no organization to explain it.
it’s Yeats between visits.