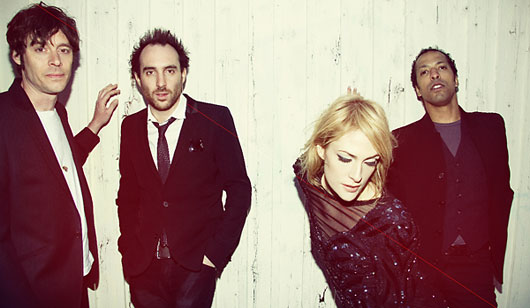 Lowery: For the last several years, Canada has had an outsized footprint in the world of indie rock. Maybe it’s nothing new—Canada has always had a bigger share of rock and pop sales than its relatively small popluation would suggest. But Rush, Loverboy, Alanis Morissette, Shania Twain and Avril Lavigne were hardly innovators. This new Pax Canada seems to change all that. I don’t want to get in an argument about who really started all this. But it is clear that a lot of the new energy has come out of the loose ensembles that are the New Pornographers and Broken Social Scene. Metric is led by Emily Haines and James Shaw. Both come from Broken Social Scene. Haines is the daughter of poet Paul Haines, who collaborated with jazz pianist Carla Bley. Emily was born in India and has said her early musical influences included Bley and Robert Wyatt. This is a somewhat typical curriculum vitae of the current crop of Canadian indie rockers. It’s what makes them good at this cerebral brand of rock and not so good at more visceral music like, say, traditional folk or the blues. (Note: I exempt the residents of Cape Breton Island and Newfoundland from this observation.) Metric would not be regarded as the most innovative of their ilk, but in a contest for who can bring the pop hooks, they win hands down. Check out “Help I’m Alive.”

One reply on “From The Desk Of David Lowery: Metric”

David, I love you man and your bands, but I also am a big Rush fan. To put them in the same sentence as those other mediocre Canadian acts is really not fair in the least. Unlike the other acts mentioned there, Rush has never attempted to direct their career towards the mainstream ie. Lowest Common Denominator. They have always made the music they wanted and if people enjoyed it, great, but I would strongly argue they have never tailored their sound to please their audience. Just saying.

Love the new album by the way, and hope to see you guys in Toronto on the 23 of June. And yes, I am Canadian, so i got to defend the boys in Rush!