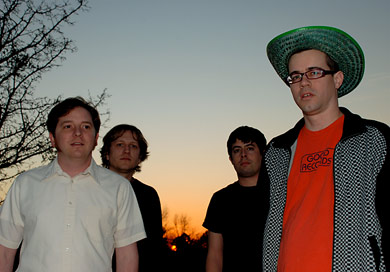 The Kingsbury Manx has been spinning mostly mellow gold since its 2000 self-titled debut, a back-porch classic with well-steeped vocal harmonies and plenty of acoustic-guitar strum. The North Carolina quartet has issued four albums in the interim, but not until last month’s release of Ascenseur Overt! (on the band’s Odessa label) has it recaptured the Wilco-trapped-in-amber pop aura of the debut. Enjoy the dulcet twang of album track “Well, Whatever” below; the Manx has some East Coast tour dates scheduled this month.