To have Cris Kirkwood back as the bassist of the Meat Puppets is nothing short of a miracle. The band he founded with his guitarist/vocalist brother Curt in 1980 broke up in 1996 due to Cris’ addiction to heroin and crack cocaine. In the ensuing years, Cris’ life spiraled far out of his control as he lost his wife to a drug overdose and spent 18 months in prison for attacking a post-office security guard. Now, almost four years clean and sober, Cris is gearing up to hit the road in support of the band’s 12th studio album, Sewn Together. Before he does, Cris will spend the week guest editing magnetmagazine.com. Read our new Q&A with Cris and our 2007 career overview of the Meat Puppets. 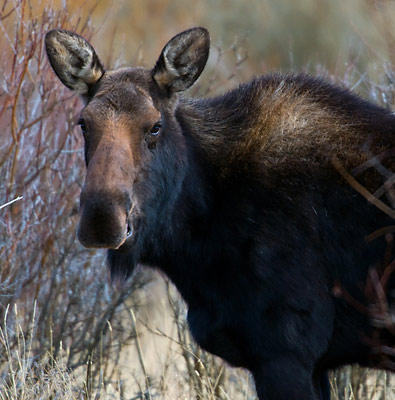 Cris Kirkwood: In the summer of ’79, right before we started the Meat Puppets, my brother Curt and I took a trip up to Alaska, which also included canoeing down the Yukon from Whitehorse to Dawson. Good ol’ Ma Nature. We were backpacking in Mt. McKinley National Park and came upon a mother moose and her little twin babies. We found the encounter to be charming, but she took exception to our presence and decided to express her displeasure by trampling Curt into the ground. As she chased after him, I thought, “How odd, that moose is going to squish Curt,” but at the last second, he turned around shouting, threw his arms up and diverted his demise. Clever. Interestingly, a few years later, Curt would become the father of twins himself. What a world.

One reply on “From The Desk Of The Meat Puppets: Alaskan Moose”

Thanks for sharing this memory Cris. This is a GREAT little story. And now we readers know what to try if we’re on the brink of death by moose. A bit of Kirkwood attitude right back at it!
BTW is this a stock moose photo, or is this from your 1979 Alaska trip?