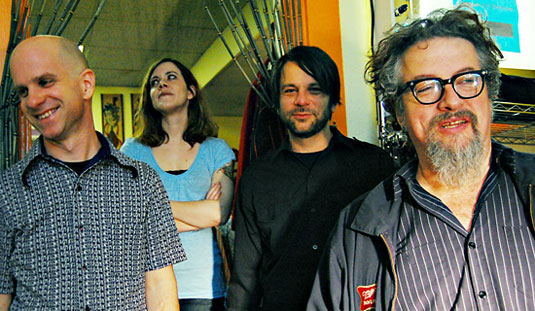 Since 2001, singers/guitarists Chuck Cleaver and Lisa Walker have have created an X factor (that’d be their John Doe/Exene Cervenka-like vocal interplay) for Wussy, the Cincinnati quartet that brings bar-band grit to droning, almost jangly guitar rock. As the group prepares for a summer tour in support of its third album (self-titled and recently issued on Shake It Records), Cleaver and Walker took the time to make MAGNET a mix tape with a broken-record theme: songs they find themselves singing obsessively and compulsively.

JASON AND THE NASHVILLE SCORCHERS “Broken Whiskey Glass” (1982)
Lisa: I once heard Chuck singing this song for an entire afternoon. Over and over, for hours! But he just stayed on one line. “Here lies … Jason … strangled by a love … that wouldn’t breathe.”

WALTER BROWN AND HIS BAND “Jelly Roll Rock” (1958)
Chuck: I used to torture our friend Karen by singing the background vocals of this song at random intervals throughout the day, loudly enough to make it slightly off-putting.
Lisa: Chuck’s version is simply shouting the word “jelly” in a dead-on Walter Brown imitation: “Jaily … jaily … jaily!”

BRIAN ENO “Dead Finks Don’t Talk” (1973)
Chuck: Lisa even does all the sound effects on this one!
Lisa: Getting the inflection right is key. It’s what would happen if that speak-singing thing Rex Harrison used to do somehow became wildly appealing and you wanted to sing along with him note for note. This is why Brian Eno is a genius.
Chuck: Because he sounds like Dr. Doolittle.

THE VELVET UNDERGROUND “Femme Fatale” (1967)
Chuck: There was a brand of bread called Bunny in the Midwest. It might still exist somewhere. Anyway, I changed the lyrics and sing them to the tune of the chorus: “Everybody loves (Bunny Bread) … Cause it’s so good to eat (Bunny Bread) … It’s such a special treat (Bunny Bread) … See the way it toast … I like it the most.”

THE MODERN LOVERS “I’m Straight” (1976)
Lisa: I like any excuse to sing along with Jonathan Richman, and this is my favorite Modern Lovers song.
Chuck: The imitation is so uncanny that I just sit and enjoy. She’s like that Rich Little.

TIM AND ERIC “Bub Bubs” (from Tim & Eric Awesome Show, Great Job!, 2009)
Chuck: This one’s surreal and she sings it ad nauseum. It may very well reach my pain level eventually.
Lisa: This song burrows itself into your brain like an earwig. In a better world, it would be a mainstream radio hit. Watch the video.

KENNY ROGERS AND THE FIRST EDITION “Ruby, Don’t Take Your Love To Town” (1969)
Lisa: Chuck does a nice take on this one, only his version goes, “You’ve painted up your lips and rolled and curled your tinted head.”
Chuck: That’s what I thought he was singing! This was before Kenny looked like he narrowly survived a house fire. I’d always wondered why Mel Tillis would write a song that rhymed “head” with “somewhere.” It wasn’t until Lisa heard me sing it and corrected me that I knew the right words. It’s sort of embarrassing.

GENE MARSHALL “Jimmy Carter Says ‘Yes'” (1976)
Lisa: This is a great track from The American Song-Poem Anthology. Gene Marshall sings it with such conviction. And I do like Jimmy Carter. No objections here.

R. CRUMB & HIS CHEAP SUIT SERENADERS “My Girl’s Pussy” (1976)
Chuck: I had the red vinyl 12-inch. One time when I was at work a few years ago, one of my bosses walked up on me singing this. He said he didn’t think the customers would appreciate me being so lewd. To this day, fuck him.

APRIL STEVENS “Teach Me Tiger” (1959)
Lisa: April Stevens has it all. She’s sexy, she’s funny. And she can work a breathy “whuh whuh whuh whuh whoh” into a song like you wouldn’t believe.
Chuck: But Lisa’s version tops it!

[…] the album. Stew favorites – and band you really ought to listen to – Wussy are the latest band to make Magnet Magazine a mixtape. The band picked 10 songs, ranging from Brian Eno to The Modern Lovers to Tim and Eric, and […]

Heh, I used to sing, “Here lies … Jason … strangled by a love … that wouldn’t breathe,” around the house all the time, too.

[…] Prep for this Tuesday night show by listening to all of the new, self-titled Wussy album right HERE, now out on Cincy’s Shake It Records  Almost as cool is the ‘mixtape’ that Wussy made for Magnet Magazine; get yourself an earful of tunes you might have never heard before. […]