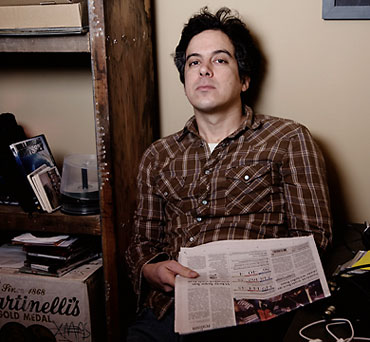 A less likely rock star than M. Ward hasn’t come down Oakland’s Nimitz Freeway in many a moon. With an almost awkward stage presence that kept the between-songs chatter to a bare minimum, and a “Forrest Gump’s box of chocolates” kind of singing voice, Ward relied heavily on his startling talent with the guitar and his undeniable ability to write songs you swear you’ve heard before—and take ones you do know in totally unexpected directions. Make no mistake about it, Matt Ward hung 10 tonight on a giant wave of fan adoration at the recently refurbished Fox Theater, an ancient movie palace whose sumptuous interior dates from somewhere in between the Indiana Jones and Fry’s Electronics dynasties.

Even the uninitiated should have had some idea what was coming tonight after what sounded like a hand-picked set of pre-concert tunes that included semi-obscure ’60s nuggets that ranged from Dionne Warwick’s “Walk On By” to a Roger Miller double-play of “Dang Me” and “Chug-A-Lug.” It’s easy to see why Ward gets on so well with former Grandaddy studio rat (and recently launched solo artist) Jason Lytle. They both revere Brian Wilson and Electric Light Orchestra’s Jeff Lynne. Before he takes it in a totally different melodic direction, Ward’s “To Save Me” begins with a whisper of a quote from “You Never Can Tell,” a 1964 hit by Chuck Berry (whose rocking guitar was one of three ingredients Wilson used to create the Beach Boys’ trademark sound).

After a lovely live version of “To Save Me,” played by two guitars, keyboard, bass and drums, Ward revisited the Berry mother lode with a rollicking run-through of “Roll Over Beethoven,” much less refined than E.L.O.’s 1972 version, whose snippets of Ludwig Van’s famous Fifth Symphony must have caused the old dead gentleman to do a subterranean 360. Then, just to keep everyone on their toes, Ward unveiled his complete retooling of Buddy Holly’s “Rave On,” a highlight of Ward’s latest album, Hold Time. In his capable hands, the song trades Holly’s rockabilly hiccups and Lubbock yelp for tubular bells and a cherry-pie/coffee-shop ambience that makes it sound like it’s been cut by N.R.B.Q. under the direction of Phil Spector before he went off his trolley.

Ward has told me on several occasions that it’s the artist’s job to blur the lines between various elements in a song. For his solo-acoustic centerpiece tonight, he conjured the spirit (if not the letter) of Kris Kristofferson’s “Sunday Morning Coming Down” on “Fuel For Fire,” originally found on 2005’s Transistor Radio. “Hold Time” did a fine job of further muddying the waters with a sighing, Harold Budd-like synthesizer worthy of an updated film-noir soundtrack that wheezed its way around a heavily echoed, Lynne-style vocal by Ward.

For all his pulling the rug out from under people’s musical expectations (a funereal re-invention of Don Gibson’s jaunty “Oh Lonesome Me” on Hold Time, for example), Ward could never have been the irritating dorm roommate who put a bucket of water over the door and waited for you to walk in. He’s more like the slightly weird comic-strip character Liō, who played tennis with a giant squid and a zombie on the same weekend you went home to get your laundry done.