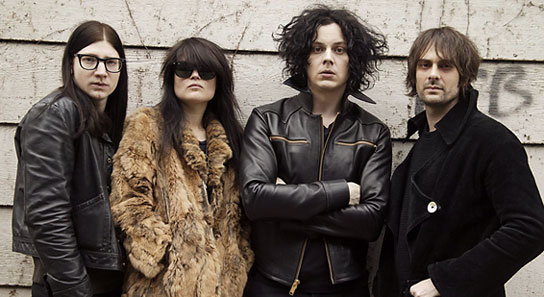 We mentioned the solo career of Cardinal‘s Eric Matthews but only recently discovered his work in Seinking Ships, his atmospheric pop group with Cleveland musician Christopher Seink and Lush’s Miki Berenyi. Seinking Ships has a self-titled EP out now and is planning a full-length release later this year.

The Waxwings‘ Dean Fertita may have exhibited non-rock behavior in his Detroit jangle-pop band, but he’s now stalking some really well-lit stages and sporting a scruffy-looking beard. He plays keyboard in Queens Of The Stone Age and is the guitarist for the Dead Weather (pictured), the group that features Jack White and the Kills’ Alison Mosshart. Fertita also has a solo album, Hello Fire (featuring members of the Queens and the Raconteurs), ready for release this year.