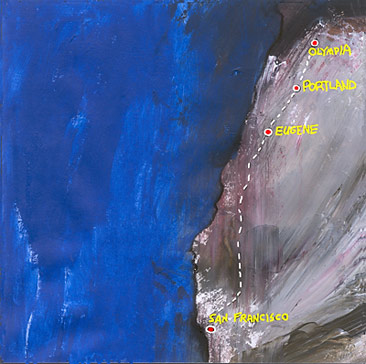 On the Black Wedge Tour in 1986, Bryan James and I decided to write a zine to distribute in San Francisco at the legendary Mabuhay Gardens; the Mab was just about to close after years of punk bands playing there. We knew we weren’t part of the great wave of punk that had already happened; we were just out there, part of nothing, until that—our nothingness—became what others seem to feel is the thing they missed out on. Bryan and I made our zine and surprised our tour mates when we handed it out at the show. The zine was called Bus Tokens—me being the only woman on the bus and Bryan being a black guy (back then people were black—or maybe Black—and not yet African-American). By San Francisco, Bryan and I each had some beefs about traveling with a pack of white guys, white guys with political ideas. In 1989, for one reason or another, Calvin Johnson was with Mecca Normal for the drive back to Olympia from San Francisco. We left early to get to Eugene, Ore., where Mecca Normal played an opening set with Vomit Launch. Immediately after playing, we drove to Portland, where we headlined a show after which we drove to Olympia, arriving around dawn. One day, three states, two shows, more than six hundred miles. I did an interview recently with a guy asking me what it was like to meet Calvin the first time, if the earth moved or something (no, it didn’t), if there was an energy that foretold of the impact we would have on of a bunch of bands, and I said, “It wasn’t like that.” The interviewer wanted to know what it was like to trade LPs with Calvin: the first Mecca Normal LP for the first Beat Happening LP. (It was Calvin’s idea to trade.) I slid the Beat Happening LP under the seat on the bus, and we headed south to the California heat, and when I got it home, it was a bit warped, but I didn’t really care because it wasn’t my cup of tea. It became my cup of tea later, after I started to see that a political community could be created without focusing on overtly political ideas. Community, I discovered, was also baking pies and swimming at the lake.