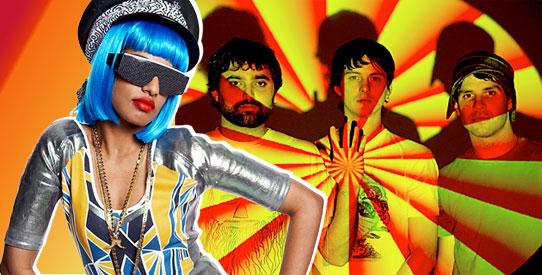 Mould: Marshall McLuhan was one of the great minds of the late-20th century. McLuhan accurately predicted a new cultural experience, where the long-standing concept of visual culture (cave paintings, religious iconography, visual media art, newspapers) would be replaced by electronic media, which would create a “global village.” A collective identity created by and connected with information that floats through our lives in a transparent and unfiltered manner. Cool media: Click it, and get a reward. Morphine drip. Following in McLuhan’s footsteps is Carles. Who is Carles? I don’t know Carles. I don’t know anyone who knows Carles. Carles is the architect of the tower of insight known as Hipster Runoff. If you haven’t experienced his surgical wit, here’s a few examples that will get you up to speed.

Exhibit A: “I wonder if M.I.A. has enough reach to impact an election. Maybe if the election was in Sri Lanka/Brooklyn, but I am afraid that it will be a difficult for her to sway the vote of people who don’t listen to indie/mainstream rap. I feel like if I were a political candidate, and some sort of ‘zany minority with ties to terrorist groups’ supported me, I would say ‘thank u, but could u keep quiet.’”

Exhibit B: “Might film meaningful parts of our road trip, then make a ‘tour video’ with our most meaningful song in the background. This tour is going to be the start of something beautiful. Going to start working on T-shirt designs. Will probably have a bird, some sort of guitar, and something ‘natural’ with our band name written in a kewl font. Printed on American Appy shirts. Do yall know any annoying bands in ur local scene who think they are going to make it?”

Exhibit C: “Where does Animal Collective realistically sit in this hierarchy of critical acclaim vs. pop appeal vs. actually selling albums? I feel like they are sort of like a ‘really funny, progressive comedy that got cancelled from cable TV’ in band format, except they are a band so they don’t get ‘cancelled’—they get the opportunity to move forward become more authentic, letting their fan base ‘grow’ with them.”

In our post-modern, post-ironic, post-whatever inappropriate thought comes into your head on Facebook-world, Carles dissects societal trends with a clarity and cynicism that is usually acquired though an academic blend of sociology and marketing. The reader comments are sometimes questionable, but expected, when you give said post-whatevers a sharpie and a freshly painted surface. Combine those oft-tactless comments with the author’s racial missteps (which seem to be all the rage with the multi-cultural youth of today), and there is a potential for the train of thought to fly off the rails. More often than not, however, Carles nails it clean out of the ballpark. Meaningful and authentic.

15 replies on “From The Desk Of Bob Mould: Hipster Runoff”

the cult of crls grows

who the fuck is this old man trying to “fit in”?

bob mould is a has been from a mediocre band. having him analyze HRO is pretty comical. oh and HRO is a pretty overrated blog by some wetback.

a has been? :lol, in your trailer park, maybe.
mediocre if your favourite band is NKOTB or whatever crap your fat girlfriend playing in your trailer.
old man? he can probably bench press you into the black hole where your brain resides.

and wtf are u twits doing on this website anyway? do they have wifi at your shit town labor office?

i’m sure that was really the kkk

We misstep to show we care!