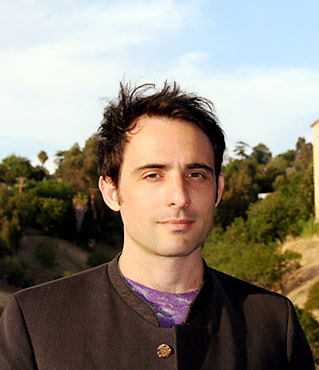 When we attempted to update you on the further misadventures of Beachwood Sparks since the band’s last album (2001’s Once We Were Trees), it broke our imaginary copy of The Trouser Press Guide To ’00s Indie Rock. There were too many side projects and offshoot bands to keep track of. So we didn’t see this coming: Keyboardist/pedal steel guitarist Farmer Dave Scher just finished a tour supporting Jenny Lewis and will release solo debut Flash Forward To The Good Times (Kemado) on August 18. We’ve heard this album, and it is the stoned sum total of the beards worn by Carl Wilson, Willie Nelson, Devendra Banhart and Marvin Gaye. The fun never stops with tracks such as country/dub (you read that correctly) hoedown “Finnz Hammock,” which contains the following spoken-word mid-song exchange between Scher and an unnamed guest vocalist playing the part of Nikola Tesla:

Scher: Hey Mr. Tesla, what is that?
Tesla: This is my latest invention, the Spirit Machine.
Scher: What happens if I touch this—
Tesla: Don’t touch that… [sound of alarm clock ringing]
Scher: Here we go!

Then it quotes a line from “Iko Iko.” Unbelievably awesome.

David Scher is marvelous. What a talent! I knew his mother in my younger days; she’s a terrific musical artist as well. She could make a banjo talk!