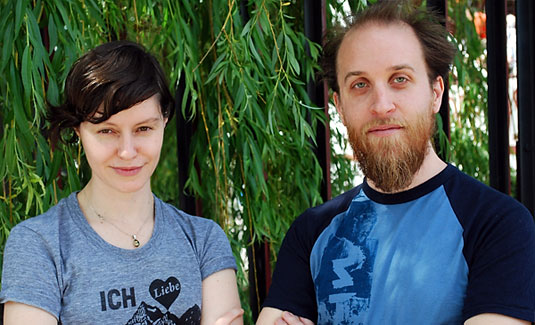 Nadja, the Toronto doomgaze duo of Aidan Baker and Leah Buckareff, accomplished two important things with the recent release of covers album When I See The Sun Always Shines On TV (The End). It offered a glimpse into the group’s musical soul, with logically chosen covers of My Bloody Valentine, Swans, Codeine, Slayer and the Cure. But it also gives unexpected treatment to Kids In The Hall’s Brain Candy soundtrack gem “Long Dark Twenties” and a-ha’s ’80s synth-pop hit that partially gives the album its title. Baker and Buckareff have given MAGNET a mix tape of proposed covers that didn’t make the album. After the jump, Nadja’s Rejected Covers Mix:

SLAYER “Necrophobic” (1986)
Aidan: I’ve always preferred Seasons In The Abyss to Reign In Blood, but “Necrophobic” stands out as my favourite from Reign. It’s got the speed, the scream, the chuggy breakdown, all in less than two minutes.
Leah: This one was just way too hard, so we did “Dead Skin Mask” instead. It was much easier to adapt to our sound.

GODFLESH “Don’t Bring Me Flowers” (1992)
Aidan: Pure was the first Godflesh album I picked up. A friend had gone on about Streetcleaner to me before, but I’d never heard it. I got Pure when it first came out and loved it right away, particularly “Don’t Bring Me Flowers” and 20-plus-minute ambient track “Pure II.” I called “Flowers” the ballad of the album, which my friends thought was crazy. But we ended up not covering it because our version sounding too close to the original.
Leah: It’s sad, pretty, noisy and heavy at the same time, which kind of encapsulates what we’re trying to do.

BIG BLACK “Precious Thing” (1987)
Aidan: I nearly wore this record out as a teenager. Loved Albini’s acerbic tones (guitar and voice), the jarring edginess of their tunes and the pounding rhythms of “Roland.” “Precious Things,” with its creepy moodiness, stood out against the more aggressive songs as almost pretty … in a harsh way. Again, though, it was difficult for us to make this song sound different enough from the original to be interesting.

BRUCE COCKBURN “If I Had A Rocket Launcher” (1984)
Leah: I particularly wanted to do a protest song. I know this is about Guatemala, but it could easily apply to things the American and Canadian governments have or are been complicit in. (Yeah, I know, nobody thinks Canadians do bad things, but we do.)
Aidan: I think Cockburn may have disowned this song because of its overly violent message. Even if the sentiment is well-intended, the lyrics are pretty harsh and seem almost out of character for Cockburn, especially compared to his early, folkier material. It is a good protest tune, though. Plus, we wanted to cover something Canadian.

WIRE “Heartbeat” (1978)
Aidan: We wanted to do this one because Big Black also covered it and we could get all self-referential covering it ourselves (covering a band covered by another band we’re covering). I’ve always liked how Wire can sound like such a different band, album to album, even song to song, while still retaining something of a signature sound.

PIXIES “Monkey Gone To Heaven” and “Planet Of Sound” (1989 and 1991)
Leah: Frank Black is one of my favorite musicians, solo and with the Pixies. Of the two, “Planet Of Sound” would be my pick since it would’ve been a lot of fun to play.
Aidan: “Monkey Gone To Heaven” is one the Pixies’ saddest songs, I think. I like the melancholy feel it has while still being, essentially, a pop tune.

NEW ORDER “True Faith” (1987)
Aidan: Maybe not as catchy as “Blue Monday” (which has already been covered enough), but I’ve always found the melody line of “True Faith” so touching with its melancholy lilt … and over such a bouncy beat.
Leah: I’ve been dancing to this song with my sisters since I was 12. Covering this would ultimately ruin if for my sisters, but that would’ve been fun, too.

JOY DIVISION “Colony” (1980)
Aidan: One of Joy Division’s heaviest tunes. We wanted to make it even heavier.
Leah: I like dancing to this one, too!

THE JESUS LIZARD “Zachariah” (1992)
Aidan: I love this lyric: “He smokes into town, goddamn/Like dust with boots on.” Classic Yow, classic tune, proof that the Jesus Lizard could do slow and dirgey just as well as fast and angular.
Leah: This is a pretty great song. A little different from most Jesus Lizard, but perfect for us.