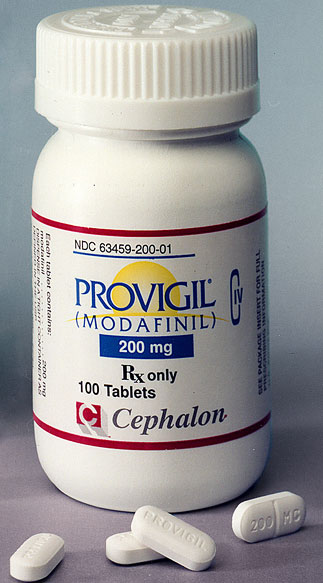 Mould: We live in a world filled with too much information. Sometimes, I wonder if the Internet is the coal that fuels a large section of the pharmaceutical industry. The constant search for unnecessary information has realigned our synapses, and the only way to cope is to grab a prescription for the newest adult-ADHD drug. I suspect these drugs are nothing more than government-sanctioned meth, packaged with smiling faces, floating clouds and the promise of being “better able to sit through meetings and movies.” I have trouble finishing tasks, learning new things and paying attention to people who ramble on with no final destination in sight. Do I qualify for one of these drugs? Given my youthful dabblings with, nay, quasi-enslavement to pill-form amphetamine, I initially balked at the thought. I was able to sample one of these new wonder drugs, modafinil, marketed under the brand name Provigil. A Schedule IV drug, it is primarily used for the treatment of various sleep disorders. Athletes and Air Force pilots have also been known to enjoy the benefits of increased energy levels and the ability to function for up to 88 hours, respectively.

My first experience with Provigil was a half-dose. It gave me a lift, one that I couldn’t really pin down. It wasn’t the abrupt and jagged jolt of street speed, nor was it the slow and steady churn of caffeine. It was focus, power and the velvet touch of a futuristic deity. Kidding, especially on the last one. It was OK. I had no sudden urge to fly a plane, run a marathon or watch a movie. They were only samples. I have two and a half left in my toiletries kit, just in case. One thing I learned early on, with both recreational and professional drugs, is to do half of what the pusher says is the proper dose. You can always do more, but you can’t do less. Or something like that.

One reply on “From The Desk Of Bob Mould: Provigil”

Thanks for the review Bob, but is this an endorsement or not? My first point, I think that the government ultimately serves that 1% of the population (in collusion with the Federal Reserve Bank) wants you buy “their drugs” to keep you focused, and working hard to keep their technocracy alive. They also want you to buy their street drugs, so they can keep their prison/industrial complex alive. My 2nd point is, drugs are drugs. I’m shiftless and idle as the proverbial motherfucker and could use a focus boost – so once again brother, endorsement or not?