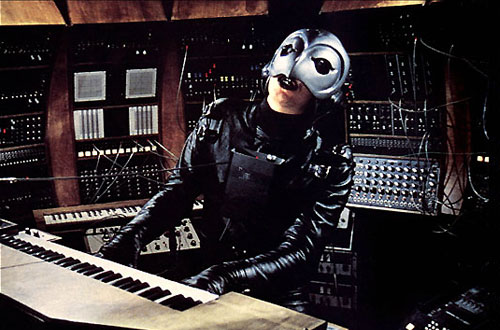 Mould: Phantom Of The Paradise is a Brian DePalma spectacle that combines The Phantom Of The Opera, Faust and glam rock. The film was released on Oct. 31, 1974. Paul Williams is cast in the role of Swan, the svengali of Death Records, who is auditioning musicians for the opening of a revolutionary new club called The Paradise. Winslow Leach, a nerdy songwriter (played by Gerrit Graham), manages to get his song heard (and then stolen) by Swan. Classic rock ‘n’ roll insanity ensues. There is a brilliant scene that depicts Leach in a recording-studio control room, seated at the keyboard, working feverishly to complete his cantata for the opening night of The Paradise. Leach is wearing his owl-like Phantom helmet/mask, speaking through a vocoder/oscillator, surrounded by pills and sheet music. For some reason it reminds me of—or maybe foreshadows—Daft Punk. It is also surely a coincide that the cantata is written for, and about to be sung, by Leach’s love interest, whose name is Phoenix (played by Jessica Harper). Hmm.

The original title of the film was to be Phantom, but it was changed at the last-minute, to avoid potential legal conflict with the copyright holders of The Phantom comic strip. In addition, almost all references to Swan Song Enterprises, the ubiquitous media concern that was headed by Swan, were removed from the film. The instigator of said removal was Peter Grant, manager of Led Zeppelin, who had created Swansong Records (an actual label) just prior to the release of the film. Grant was a major thorn in the side of 20th Century Fox, and his threats to block the release of the film forced DePalma and 20th Century Fox to mask or recut major portions of the film. The original theatrical release was met with the sound of no hands clapping, except for, inexplicably, the city of Winnipeg, where the movie and soundtrack were enormous successes. In the intervening years, two Phantompalooza events have taken place in Winnipeg. I love showing this movie to bands on the eve of recording sessions. It’s a great way to get everyone, including myself, to unwind a bit before the big day.