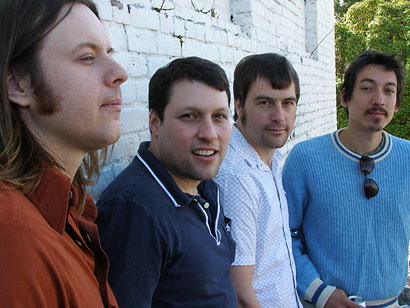 Radiohead may have given us In Rainbows, but the reunited Polvo has prepared In Prisms, which—if you look at the cover of Dark Side Of The Moon—is like how the rainbow first started, maaan. As previously reported, the members of Polvo (drummer Brian Quast is relatively new to the group) reunited last year to play All Tomorrow’s Parties; the full-length In Prisms arrives September 8 on Merge. Here’s “Beggar’s Bowl,” which does not warrant the exhumation of ’90s-vintage rock-critic term “math rock” but does sound like two songs playing simultaneously.

I’ve gotten to see the re-formed Polvo a few times now, and really like what they’re doing. While I understand some of the criticisms that say the cleaner production on this mp3 makes them sound more “metal” and less “indie”, I still like this track a bunch and am looking forward to the new album. For those that want new(ish) Polvo tracks that have a more “indie” feel, check out the tracks from a benefit show they played last year at http://www.cytunes.org/album/26/ (I’m a volunteer – CyTunes is an all-volunteer effort to raise money for cancer research in memory of Cy Rawls)