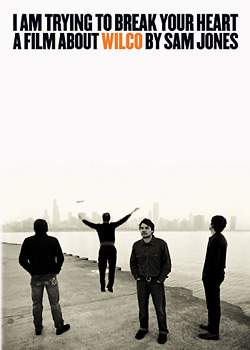 With this week’s release of Wilco (The Album), there’s no better time to reconsider Wilco’s steady progression from scrappy alt-country forebears to kings of the AAA charts. Since each of Wilco’s studio albums has been pored over, criticized and deconstructed countless times, MAGNET’s Matt Siblo looked toward the band’s output on film. Watch as Jeff Tweedy can’t afford to buy Wendy’s for his hungry child! Marvel at guitarist Nels Cline’s inability to wear pants that cover his socks! See the Tweedy household and all of its bric-a-brac! And wonder at who’s been supplying this band with such awful beanies for the past decade. Today’s feature: 2002’s I Am Trying To Break Your Heart.

A “making of a making of” as Tweedy would later dub it, I Am Trying To Break Your Heart is the allegorical journey of a band battling both itself and a far more insidious villain, the major-label record industry. “I know it’s cool to bitch about your record label,” Jay Bennett coyly remarks. “But they’re giving us $85,000 for us to record a record they haven’t heard a note of.” Right. This type of naiveté helps the film’s artistry-over-commercial-viability message not seem cloying. When Tweedy reacts to the label’s rebuffing of Yankee Hotel Foxtrot, he doesn’t fly into a megalomaniac rage; rather, he demurely states that the label’s reaction hurt his feelings. One of the factors for IATTBYH‘s longstanding appeal stems from the unbelievable candor and access Sam Jones was afforded to its subject, adding a delicacy to the film that extends beyond the purview of a fans-only homage or a behind-the-scenes concert film. The unveiling of Wilco’s fragility, captured perfectly in the grainy black-and-white tones of a Chicago winter, is compelling because it avoids the cringe-worthy self-parody (though there certainly is some of that) of Metallica doc Some Kind Of Monster. For starters, the motives for making a full-length feature about Wilco in 2001 stem from Jones’ obvious admiration for the band and not an effort at deconstructing the rock ‘n’ roll mythos, since one has to attain the status of an idol in order to be killed. Flirting with women after a show, bassist John Stirratt is propositioned to sign a woman’s backside. “Someone in our band did that once,” he retorts. The doldrums backstage are surprising, yet not in the least way striking.

And while the film gives credence to every story about “the man” not caring about “the music,” IATTBYH is more endearing when it peers into the band’s complex psyche. Watching Tweedy squirm backstage while contest winners ask whether his new album is going to sound “more like A.M. or Summerteeth,” the discomfort from this innocuous type of glad-handing is palpable. It’s striking to watch a singer who routinely stands in front of thousands to be so uncomfortable in his own skin. All it takes is for one yahoo to reference Tricky and Tweedy abruptly leaves the room. The scene is not only fascinating because the viewer is allowed voyeuristic access to such an uncomfortable interaction but because it provides a stark contrast to the more relaxed and populist attitude Tweedy would later embrace.

I’ll refrain from providing any armchair philosophy on the importance of Yankee Hotel Foxtrot since Jones recruited two of rock’s most hyperbolic enthusiasts, Greg Kot and David Fricke, to pontificate on just that, spinning yarns and toothy grins about the grandiose importance of the album as well as the band’s ultimate historical significance while providing some raw sociological data on how the kids these days talk too much on their cell phones. Unbeknownst to them, all of this talk about Wilco not having a place on the radio would instantly date itself, as many of the issues regarding the production and distribution of albums that led to the imbroglio surrounding Yankee Hotel Foxtrot are not quite as ubiquitous, especially for those as established as Wilco was even pre-YHF.

In the liner notes of the DVD, Jones mentions concerns about whether the film would come across as one-sided in the wake of the falling out between Bennett and the rest of the band. It has become next to impossible to watch IATTBYH without projecting personal prejudices regarding Wilco’s past and future output onto this one 90-minute document. The director claims to have gone to great pains to edit some of the more spiteful comments Jay made about his leaving in an effort to not exploit the bad feelings that were still rubbed raw. Whether he did an adequate job will now forever be open to speculation and conjecture.