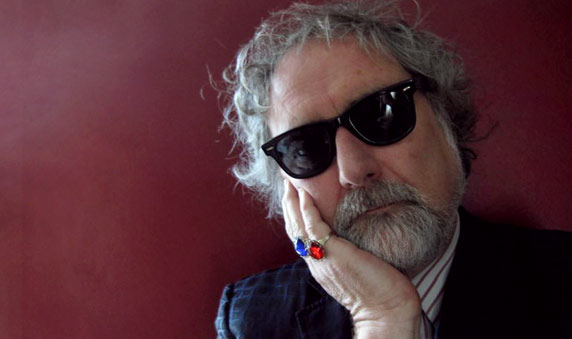 Minus 5/Young Fresh Fellows frontman Scott McCaughey has been blurring the distinction between his two bands for a while, to the point where many of the songs on either group’s LPs would be appropriate for the other. (The last proper Fellows record, 2001’s Because We Hate You, was even released as a two-fer with the Minus 5’s Let The War Against Music Begin.) Both return this week with new efforts: the Minus 5’s Killingsworth and the Fellows’ I Think This Is (sold separately this time, both on Yep Roc). The tunes are more divergent, with Killingsworth featuring a heavy alt-country vibe (think of it as McCaughey’s No Depression album, minus the No) and I Think This Is being a typically funny, Fellowsy garage-pop workout. When he’s not fronting his own combos, McCaughey is a sideman for obscure indie darlings R.E.M. and Robyn Hitchcock, the latter of whom produced I Think This Is. McCaughey took a few minutes while on a train from his new hometown of Portland, Ore., to his former one, Seattle, to talk about how Hitchcock came to be involved with the famously lazy Fellows, as well as the future of the Baseball Project, his national-pastime-themed band with Steve Wynn and Peter Buck. McCaughey is also guest-editing magnetmagazine.com this week.

MAGNET: When I interviewed you in 2003, you said I’d caught you at the one time where you thought the Young Fresh Fellows might go ahead and officially break up. You obviously did not pull that trigger, so what happened in the interim that resulted in a new record?
McCaughey: Hmm, did I say that? My usual stance is that officially breaking up would be too much work. The Fellows have never been big on decision-making. We avoid it religiously, and this has no doubt both contributed to our success and to our lack of it. As for the new album, I must say it was Robyn Hitchcock who really spurred us to do it. Not that we didn’t want to, but he was the one who basically said, “I’m coming to Seattle on November 20, and we can go into the studio and do the Fellows record then”—thus, again, taking decision-making pretty much out of the equation for us.

Looking at it purely on a superficial level, Hitchcock would seem to be the choice to produce a Minus 5 record instead of the Fellows.
I did originally approach Robyn 20-plus years ago about producing what may have been either my first solo album or what became the first Minus 5 album—historical accounts may differ. That didn’t happen, but the seed was planted. During the Young Fresh Fellows/Soft Boys tour in 2001, we cemented a relationship that had great beginnings in the Hitchcock/Fellows collaborative surprise shows that reared up regularly at the Crocodile in Seattle in the late ’90s, as well as a session for his Jewels For Sophia album that included the Fellows. Honestly, the idea for Robyn to produce a Fellows album might have been his. Who would we be to question it?

Judging by his last couple of records, it looks like the Venus 3 is Hitchcock’s new Egyptians. What’s it been like recording and touring with him?
Well, if the Venus 3 can make as many records as the Egyptians did, I’ll be happy! I’m definitely proud of the two we’ve done so far. And there’s a third, tentatively called Propellor Time, which will slither into view sometime, like an electric eel from a coral closet. We’ve recorded a lot with Kurt Bloch in Seattle and with Charlie Francis in London, and they are both fantastic people to work with. Robyn continues to come up with amazing songs, so doing the records has been nothing but fun. And as for touring, well, we aim to entertain, and with Robyn that’s never a problem. Also, it’s just an incredible feeling for me to be in a band with someone whose music I’ve admired pretty obsessively for close to 30 years. Peter (Buck) and Bill (Rieflin) and I are quite a good, solid unit, so it’s just been a very natural jump morphing into the Robyn Hitchcock Experience.

I read on his website that someone has been impersonating him on Twitter. Do you use Twitter or Facebook? What do you make of all of this social-networking stuff?
I have not delved into Twitter or Facebook. I suppose that leaves me behind in the current world of “me me me” technology, but I spend so much time on the computer as it is. I don’t look down at it—I’m just afraid to take the plunge. I feel like I never have time to pick up a guitar and write songs these days anyway. And maybe people don’t really need to know that much more about my fascinating life.

If someone impersonated you on Twitter, would you be offended or find it funny?
I guess it depends on how offensive or funny their tweets were.

Since that 2003 interview, you’ve gone through a divorce, which seemed to influence the Gun Album (2006’s self-titled Minus 5 LP, featuring gloomy subject matter and a gun on the cover). How are things going for your personally these days? Does the new Minus 5 reflect your mood as much as the last one did?
Personally, in general, things are really good. I see the new Minus 5 as emblematic of my becoming a Portlander, which is pretty obvious given the cover art and the musicians who play on the record. That’s not a knock on Seattle at all, as it’s still a great city filled with many tremendous pals and cohorts. The Gun Album was definitely an album about painful transition, and Killingsworth is about acceptance and being in a new place, I guess. That being said, a lot of people who’ve heard it find the songs slightly dismal in subject matter as well. But to me, it’s a positive record, maybe because I feel good about my surroundings and the awesome friends, new and old, who helped me make it.

Steve Wynn told us that there’s more Baseball Project stuff on the way. Can you give us an update? Will there ever be a Baseball Project tour?
We hope to start recording some new songs in August, and we will also be touring as the Baseball Project/Minus 5/Steve Wynn in August and September. It’s going to be great! Unfortunately, we’ll be playing every night, so we probably won’t get to see any ballgames. There goes the rock ’n’ roll again, hampering my enjoyment of the finer things in life.

One of the great things about the Baseball Project songs is that it sounded like you guys really know the game, or at least took the time to do the research. Would you consider yourself a true, diehard fan of the game?
Yes, I’m pretty diehard and have been since I was a kid. I’ve never stopped, really. I’m probably not as knowledgeable as your local sabermetric guru/geek, but as a reader of box scores, I can hold my own. I still just love the experience of going to a game—nothing like it, really. I went to a Nashville Sounds AAA game a few days ago. The funnel cakes sure were popular.

If memory serves, you grew up in California as a Giants fan. Where are your baseball loyalties these days?
Now I’m in Portland with no big-league team, but I do get to see up-and-comers and down-and-outers and one-more-go-ers with the AAA Beavers. I grew up first a Giants fan, then the amazin’ Oakland A’s worked their way into my heart. In 25 years in Seattle, of course, I became a Mariners fan, through thick and mostly thin. I still follow all three teams and hope for the best.

Before our now two-year-old son Luke was born, I was trying to think of names to submit to my wife for her thoughts. I had a list of about six or seven, and Luke was on there, but I don’t know that it was the frontrunner. At the time, I was listening to the Gun Album a lot, and the more I heard “The Original Luke,” the more I liked the name. I don’t have a question here, I just wanted to thank you for being partially responsible for influencing the selection of what I think is a very cool name.
Luke’s a cool name. I don’t know why I thought of that name and why it turned into a song. But I’m glad if it came in handy!