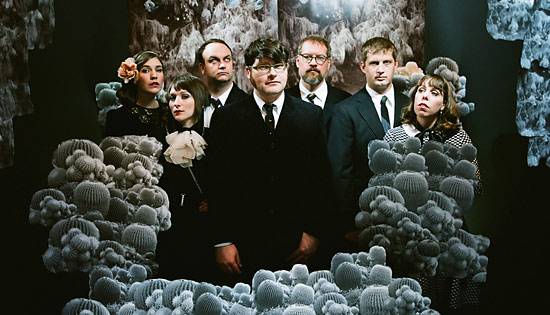 When the Decemberists signed to Capitol for 2006’s The Crane Wife, it was a sign that they, and their particular brand of quirk-friendly indie, were gunning for the mainstream. But Colin Meloy and his band of Portland, Ore., artists were the most unlikely standard-bearers of the indie cause. Influenced by folk and prog, prone to telling tales of ghosts, wayward women and man-eating whales, the Decemberists never topped anyone’s list for the next small-time band to make it big. But thanks to Meloy’s nerdy charm, clever lyrics and a band that could tackle the most epic of themes, the Decemberists are now one of the best-known groups in modern rock. With the band in the middle of part two of its “A Short Fazed Hovel Tour,” it’s time to look back and examine the most overrated and underrated Decemberists songs. Read our recent Q&A with Meloy and one from 2008.

:: The Five Most Overrated Decemberists Songs
1. “Apology Song” (2001)
There are many “non-traditional” vocalists in this world; Meloy ranks on the more nasal side of that category. It’s not that he’s a bad singer, but “Apology Song” turns him into the musical version of a sinus infection. The tedious tale of a purloined bicycle, “Apology Song” is often name-checked by fans despite not being very good. Plus, its referencing of Missoula’s Orange Street Food Farm has given fans a reason to travel to Montana, and that, frankly, is unacceptable.

2. “July, July!” (2002)
I’ll be honest. I like “July, July!” But that’s not really the point here. “Overrated” does not mean “bad” (although “underrated” almost always means “brilliant”). “July, July!” is a signature track for the band, but it’s so damn effervescently cheerful that it gives me a headache. Not to mention an instant disqualification for using the word “camisole” in a rock song. So far, this July has featured downpours, the Michael Jackson funeral and Ron from the Harry Potter movie getting swine flu. What’s so great about July? “Myla Goldberg” did everything that “July, July!” wants to do, only seven times better and 30 seconds longer.

3. “16 Military Wives” (2005)
While “16 Military Wives” is an all-right number, in an enigmatic way, it continues to cement the kitschy image that the Decemberists always had the power to rise above. When you listen to a track as powerful and poignant as “Red Right Ankle” or “Oceanside,” you can’t help but be struck by a band both profoundly thoughtful and remarkably articulate. Even lighter moments like “Billy Liar” had more to say than this track. And so what a shame to listen to “16 Military Wives” played off as a strange, unintelligible joke. And the music video, with its overtures to auteur of kitsch Wes Anderson, isn’t doing them any favors.

4. “Yankee Bayonet (I Will Be Home Then)” (2006)
This Cold Mountain reject has about as much charm as Renee Zellweger and wears out its welcome equally fast. Meloy’s gift for words is a pretty precarious thing; one minute he’s crafting the intricate epic of “The Island,” and the next it’s self-indulgent gibberish like “You are in the ground with the voles and the weevils/All a’chew upon your bones so dry.” The Crane Wife was a step forward for the band, no question, but there’s something about the honesty, the relatability and the sweetness of those early tracks (like “The Engine Driver” or “Here I Dreamt I Was An Architect”) that “Yankee Bayonet” just can’t match. If “O Valencia!” was The Crane Wife’s standout track for a reason, then “Yankee Bayonet” represents the Decemberists at their most pretentious.

5. “My Mother Was A Chinese Trapeze Artist” (2001)
A number that’s always come across as more clunky than witty, “My Mother Was A Chinese Trapeze Artist” has become a fan favorite while the much better (and musically similar) “Mariner’s Revenge Song” languishes in obscurity. It’s not that “quirkiness” in Meloy’s hands is a four-letter word. Tracks such as “A Cautionary Song” or “Sunshine” are sweetly strange and wryly funny, respectively. And Meloy’s efforts with Tarkio, his infinitely superior previous band, were often both riotously funny and defiantly unique. The problem is when their “quirkiness” becomes overpowering, and “Chinese Trapeze Artist” is less funny, more grating.

:: The Five Most Underrated Decemberists Songs
1. “Raincoat Song” (2008)
Even if you felt betrayed by their jump to the major leagues, you can’t deny that this delicate number more than holds its own against the band’s early classics. A cut from the Always The Bridesmaid singles series, “Raincoat Song” is impossibly fragile and all the more beautiful for it. While the three volumes of Always The Bridesmaid were full of almost uniformly good tracks, it’s the sweet simplicity of “Raincoat Song” that keeps in our minds long after the showers have stopped.

2. “Everything I Try To Do, Nothing Seems To Turn Out Right” (2004)
This gem, found on the b-side of the “Billy Liar” single, never seems to turn up on lists of fan favorites, despite being one of the band’s best tracks. Meloy’s lyricism is in fine form here, including my personal favorite “And we both had some fun, though I twice bit my tongue/And it lasted too long for my taste.” Any man who can write those lines and sing them before a crowd clearly has some confidence. Any man who can then set those lyrics to a haunting and memorable beat clearly has some skills.

3. “On The Bus Mall” (2005)
A friend of mine once dismissed the Decemberists as sounding like “gay pirates.” While that might be the best summation for the band I’ve heard in a long time, it’s not exactly the whole story. Take “On The Bus Mall,” a Picaresque tale of two runaways (ostensibly male, though that hardly makes a difference) who turn to prostitution and discover their own kind of love. Powerful, sweet and infinitely quotable, it should have become their signature track—but somehow passed by unnoticed. “On The Bus Mall” was an anthem from a band of misfits and deserved to be treated as such. Kings among runaways, indeed.

4. “As I Rise” (2003)
A surprisingly delicate number seemingly tacked onto the end of Her Majesty, “As I Rise” is the perfect antidote to the ballooning, bombastic prog-rockers the Decemberists seem set on becoming. It’s not that we didn’t enjoy The Crane Wife or The Hazards Of Love, it’s just that the sweetness and charm of “As I Rise” was lighter than air; any more pressure put upon it and, poof, gone. While Her Majesty featured stellar songs like “The Bachelor And The Bride” (also underrated), “As I Rise” was among the best of the bunch.

5. “Sleepless” (2009)
Proof that a seven-minute opus need not be bombastic, this cut from charity compilation Dark Was the Night might not be the most accessible Decemberists track, but that doesn’t mean it’s not brilliant. “Sleepless” is simultaneously mournful and hopeful, sounding more like a b-side from Picaresque than a cut from The Crane Wife. When the over-hyped melodrama of The Hazards Of Love becomes too much but numbers like “The Sporting Life” still seem wafer-thin, it’s time to turn to “Sleepless.”

15 replies on “The Over/Under: The Decemberists”

I’ve only listened to The Crane Wife disc when it came out, as a boyfriend wanted me to hear before he took me to see the Decemberists live in Upper Darby. Loved the damn tunes, he broke my heart and I haven’t listened to the CD still in my car over 2 years later until recently. I’m ready to love them again and listen to some other works of theirs (still not ready to date unless Meloy is available). Thanks for suggesting some options for me.

…… an over/under I can fully get behind. Anyone that’s heard Meloy do “Everything I Try To Do, Nothing Seems To Turn Out Right” on acoustic guitar should attest to the song’s underatedness.

not particularly fond of this article. apology song, overated? give me a break.

Whoa gotta side with Matt on this one.

Why pick so many obscure ones as underrated? Of course they’re underrated if very few people know them! “The Sporting Life” brings tears to the eyes, either from laughter or childhood pain. “Yankee Bayonet” is another one I’d pick if I wanted to influence the uninitiated to The Gay Pirates (great quote!). There’s also the one whose title escapes me at the moment…about the spies and the bathroom stall off the National Mall…chilling.

What the fuck is this shit? “…while the much better (and musically similar) “Mariner’s Revenge Song” languishes in obscurity” – are you fucking insane? I would love to see a show where they don’t play this shitty song. Seriously, what the fuck kind of idiot think that Mariner’s Revenge “languishes in obscurity”? What a shitty song and what a shitty article. Fuck you.

I’m glad I spoke up. The revolution will not include The Decemberists!

I think you and I bought the same bullshit detector, Matt, as mine was buzzing the second I heard this band.

Isn’t “Everything I try to do…” an early version of “On the Bus Mall”? Seems weird to put them both on the list, even though they’re both great songs.

And I think dissing on “The Sporting Life” means you are underrating it.

Maybe I’m a philistine but I never really got this band (or anything Radiohead has done since OK Computer, but that’s another topic for another day).

I guess its soft rock appeal fits nicely next to John Mayer in the “soundtrack for yuppies driving their kids to art class or soccer practice” category.

I’m with Matt’s opening post. I thought this was to be the first *trick* over/under, where it was all over and no under.

I love The Decemberists. But calling “Everything I Try To Do” underrated and “Apology Song” overrated is ridiculous. Same with “Chinese Trapeze Artist”, “16 Military Wives”, and “Yankee Bayonet.” If you’re looking for underrated songs, try songs on the actual albums; b-sides can’t be underrated, because most people haven’t heard of them.