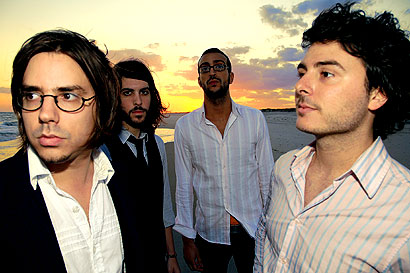 New York’s As Tall As Lion is set to release its third album, You Can’t Take It With You, which is filled with songs about how we as a society are so detached from one another. The LP comes three years after the band’s self-titled sophomore album, which As Tall A Lion wanted to build upon to create a more mature sound and capture the feel of its live performances. You can hear this in “Circles,” You Can’t Take It With You‘s first track. The three years it took to make the album were riddled with problems, including having to change producers three times. “There was a black cloud over this album the entire time,” says guitarist Saen Fitzgerald. “But looking back on it now that the work is done, I can say, ‘You know what? We went through all that shit, and I’m so glad we did because it gave the album grit and tension and character. It shaped it into something special.’ We’re all extremely proud of it.”