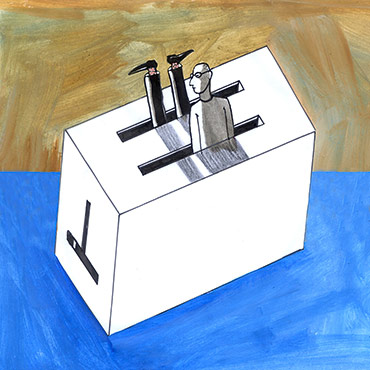 The Politics Of Sleeping
My band is a duo. One man and one woman. We are not a couple, but in the beginning, that seemed weird to people. The beginning was 1986 when there weren’t many women in bands, and I guess it seemed weird that a man and a woman would be a band and not be a couple. In cities where we didn’t have friends, we’d go home with nice strangers from the show and hope there wasn’t a party or three flights of stairs or annoying pets or early-morning parking restrictions. We’d arrive at the home of a fan or a friend of a friend or the drummer from the opening band, and there’d be one bed—they assumed we were a couple. There was a lot more assuming going on back then. In the ’80s. We assumed people would notice we were a band and not a couple. I do all the driving in our band, and David does all the lifting. Amps, guitars, luggage, merch; it all comes out of the car every night. I do not lift anything at the end of the night because I drive all day, but sometimes the people we stay with watch Dave lug all this stuff in and I’ve plunked down and picked up a magazine and they’d assume I’m some sort of princess—”Hey, I do all the driving, man.” Driver also includes changing tires and minor repairs—removing corrosion from batteries and checking fluid levels and tire pressure on those old cars I used to drive: the ’72 Impala and the 80-something Grand Marquis. So the policy began that I got the bed and David took the floor—based on me being the driver. The driver got the bed and controlled the tape deck: simple, practical rules of touring. We listened to a lot of Scrawl. We gravitated to our tasks quite naturally. Naturally, I took the bed, but I get up first and it is my job to find Dave a coffee and bring it to him, setting it down next to him on the floor with a stir stick, creamer and a couple of sugars. After too many awkward conversations in kitchens, we implemented a policy of never saying the person’s name we’re staying with because we almost always got it wrong. “Good morning, Steve, do you have any coffee around here?” Name’s not Steve. We have learned to ask about coffee before the not-Steve-guy goes to sleep: “Where’s the sugar, the filters, the beans?” Once, in Philly, we stayed with one of the Strapping Fieldhands with whom we’d been out late eating cheesesteaks after a show. The bathroom floor in his place was coated in shampoo. It was unbelievably slippery: a deathtrap. I kept telling everyone how slippery it was, but no one believed me until they went in there and practically died—crashing around, grabbing the sink, towel rods and shower curtain. In Boston, we stayed with a guy who really wanted us to stay, which I am always wary of; we don’t like to stay with people who really want us to stay. It’s too scary. He had a dog that we didn’t relate to. The dog, after hours of being the focus of attention and hours of me being bored to tears, went and pissed all over my sleeping bag. It came back into the kitchen looking so fucking pleased with itself. There were nights when I slept inside my nicely padded, fold-out guitar case, and once we ended up sleeping in an econo-size rental car in San Diego. There was no other option at the end of the night. I remember the passing residents of San Diego looking at me with disgust as I brushed my teeth on the sidewalk in the morning, pouring bottled water over my toothbrush and spitting extra noisily onto the parched grass of the boulevard.