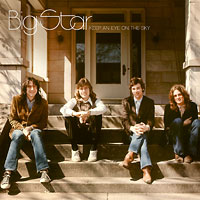 As a career retrospective and unreleased/rarities compilation, you couldn’t do much better than Keep An Eye On The Sky, Rhino Records’ long-anticipated Big Star boxed set. The band’s canonical albums are few—two polished releases and a post-mortem assemblage that never made it to a final draft—but what Big Star lacked in released product, it more than made up for in depth and scope, and that long historical reach provides the context for this packed four-disc set. Keep An Eye opens with pre-Big Star recordings from Alex Chilton and Chris Bell, tracking the folksy/psychedelic origins of the band’s earliest recordings, including a rudimentary version of Bell’s exquisite “Try Again” under the Rock City sobriquet. The first three discs follow a sensible division, grouping demos, alternate takes and mixes and album versions of songs from the #1 Record, Radio City and Third/Sister Lovers sessions. Though there’s nothing here in the way of a holy grail—Big Star burned hot, but too quickly to leave a lot of material behind—the unreleased music is always interesting and frequently revelatory. The demo material from Third/Sister Lovers, in particular, is a treasure trove of early drafts and alternate performances that reveal the melodic roots of what later became notoriously shambolic sessions; to listen to the demo of “Downs” beside the album version is to hear how astonishingly prescient and fearless a band Big Star had become by 1973. The fourth disc offers a pristine live recording, taped at Lafayette’s Music Room in Memphis, from the period between the release of #1 Record and Radio City. It’s a passionate performance, and yet this final disc is as poignant as it is energetic. In the pauses between songs, the audience’s indifference to the music they’re hearing is palpable. Listless applause and polite silence hang in the gaps, and the criminal lack of success Big Star faced in its own lifetime becomes a part of the official transcript. We knew that already, of course, and yet to hear it so plainly on the final disc still hurts, a bit. Lush photographs and detailed liner notes, most notably a deep critical assessment by Memphis-based journalist Bob Mehr, complement the music and render Keep An Eye On The Sky a fully satisfying archival project. The albums are still the place for novices to begin, but anyone with a desire to dig deeper will find this box a worthwhile purchase indeed. [Rhino]

One reply on “Record Review: Big Star “Keep An Eye On The Sky””

Thanks for your kind remarks about the Big Star box and Cosmos re-issue. The live recordings are from a couple of shows where Big Star was opening for Archie Bell & The Drells, hence the somewhat muted crowd response. But maybe this is better than having a recording of their performance at the infamous Rock Writers Convention. You can actually hear the band.