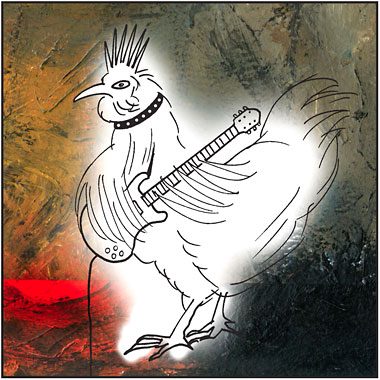 Driving south through the Rhône Valley, heading from Paris to the Riviera, I was in a small town thinking about what to make for dinner. I was on a long trip through Europe, travelling and cooking in a Volkswagen van. In France, you couldn’t just pick up an orange, you had to ask for trois oranges and hope they didn’t give you a three-kilo bag. The shopkeeper and other customers laughed when I wanted a few potatoes; I’d asked for terre du pommes, which was more like earth of the apples, as opposed to pommes du terre—potatoes: apples of the earth. Yes, very funny. Now give me my fucking potatoes.

I wanted part of a chicken to cook, but the verbs “cut” and “cook” are similar enough to each other that he presented me with a cooked chicken rather than cut-up chicken. I was also trying to buy a corkscrew using various gestures that you’d think would work, but didn’t. Maybe he thought I was hitting on him.

Anyway, most campgrounds had red wine available, so one didn’t essentially need a corkscrew. And yes, red wine and chicken. That chicken was the best chicken I had ever tasted, and to this day, while perhaps I have eaten better chicken and maybe even made chicken as good, that chicken is the standard I maintain in my mind. The best chicken.

The usual procedure for settling into a campground was to drive slowly around looking for a level spot with some shade and no screaming kids. Park the van, turn on the propane, and take an empty jug over to the office to check in and fill up with red wine. Evenings were spent reading, playing hand-painted macaroni checkers, or I’d be adding to one of many 50-page letters I was writing to my parents. I have a chocolate box of these letters sitting on my desk—too many to photocopy, too much to transcribe.

“We drove 90 miles south to Mistra, which is known as the Pompeii of Byzantium. The ancient city is mostly in ruins on the side of a steep hill. We walked through several frescoed churches and a huge 14th century palace overgrown with vines. All the construction was done in blocks of stacked stone. Evidently the tensile strength of stone is very low and the strength comes from the pressure against the next stone in the arch. This explains a lot of the features of this period’s architecture—round windows, arched doorways and roofs.”

That chicken, being the one that I experienced as the best, is, in a way, like a response to a band or a song. Except that with music, you can retrieve and experience it again and extend it to others in exactly the same form you discovered it in. Talking about chicken is not tasting chicken, like talking turkey about music is not hearing it. Sometimes it is maybe better just to eat the chicken and shut up about it, knowing that everyone else is eating chicken, too.