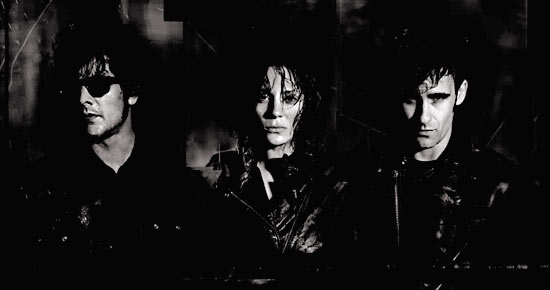 Erasure will celebrate the 21st anniversay of influential album The Innocents with a deluxe reissue, out Tuesday on Mute Records. The two-disc set also comes with a DVD … Speaking of big anniversaries, the Bouncing Souls are celebrating their 20th birthday with an album out next month on Chunksaah Records, as well as an upcoming tour, and another installment in their “song of the month” series … Indie-rock supergroup Sweet Apple, which features Dinosaur Jr’s J Mascis, Cobra Verde’s John Petkovic and Tim Parnin and Witch’s Dave Sweetapple, has announced its signing to Tee Pee Records. The band will release its debut on March 30. Download “Do You Remember” … Dutch indie group Bettie Serveert has joined with the Second Motion label to release a new EP, due in January … Ben Gibbard (Death Cab For Cutie) and Jay Farrar (Son Volt) have announced five new tour dates for January in support of their album, One Fast Move Or I’m Gone: Kerouac’s Big Sur. The boys will do a brief tour, passing through Portland, Seattle, Austin, Ann Arbor and Milwaukee before concluding in Minneapolis … Gibbard is known for his melancholic lyricism, but Chris Eaton, songwriter for Rock Plaza Central, has him beat; Eaton has put the band on hold while he finishes his third novel … Fans of Atlantic Records should be in heaven: The label has announced the release of a limited-edition, 10-disc CD/DVD boxed set with 165 tracks spanning over six decades. Atlantic Records: Time Capsule features songs by everyone from Otis Redding to the Rolling Stones to Paramore. One of those things is not like the other, it seems … Robert Schneider of the Apples in Stereo has announced the start of his “heavy psych side project,” dubbed Thee American Revolution, through the famous Elephant 6 collective. The band’s debut album is called Buddah Electrostorm. Download “Power House” … Black Rebel Motorcycle Club (pictured) is releasing its fifth studio album, Beat The Devil’s Tattoo, on its Abstract Dragon label (in partnership with Vagrant). The LP will be out in March … Miles Kurosky, former frontman of Beulah, will release of his first solo album, The Desert Of Shallow Effects, which will be in stores on March 9 via Majordomo/Shout! Factory.