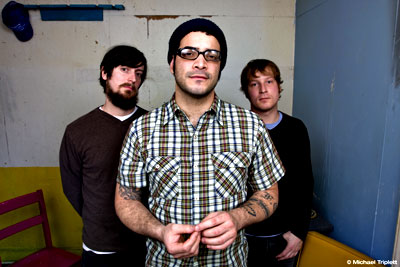 Fin Fang Foom has been through a lot during its 12-year run, between the death of original drummer Peter Enriquez and guitarist Michael Triplett’s recent near-fatal experience battling spinal meningitis. However, the Chapel Hill, N.C., trio has managed to take its misfortunes and turn them into something beautiful with just-released third album Monomyth (Lovitt). Opening track “Magnetic North” is dark and hypnotic, slowly brewing into distorted chaos that lives up to the album’s title, a reference to the mythical narrative of “the hero’s journey.”

The music is awesome and those doods are hawt!