As 2009 comes to an end, we are taking a look back at some of our favorite posts of the year by our guest editors. Today’s entry is from June 16. Here, Bob Mould writes about the changes in day-to-day life in Washington, D.C., since Barack Obama was elected president. 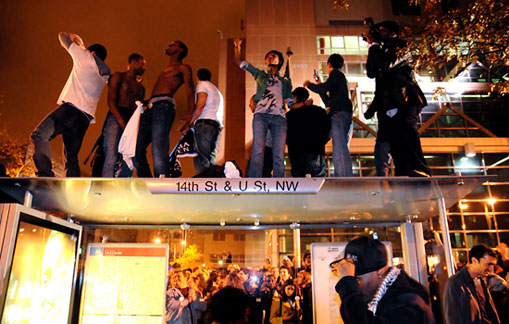 Mould: Living in D.C. for seven years now, I can safely say that the place has changed—considerably—in the past seven months. I currently live in the U Street neighborhood, which was the epicenter of the 1968 riots. In conjunction with a Shepard Fairey show at Irvine Contemporary this past fall, two Obama portraits appeared in the neighborhood: one at 14th and P Street NW and another at 14th and U Street NW. On election night, a group of us were gathered at my home, watching the state-by-state returns. At 10 p.m. EST, the California polls closed, and Obama was projected to win the state. In doing so, he clinched the race. Ninety seconds later, with the television at a decent volume, we could hear the celebrations beginning on the U Street Corridor. We stepped out to observe for a moment, turned back, locked up the house and joined in the night-long celebration—the epicenter being at 14th and U, under the watchful eye of the Obama portrait. I am not certain if Fairey or his people, when affixing the Obama Progress art upon that wall, knew the historical significance of 14th and U.

Anyhow, the changes: People seem friendlier than normal. There is an increased sense among the habitants, mainly those walking on the street, that there are actually other people living in D.C. For years, it felt like a “me” town, and lately, I sense a “we” arising. There are less SUVs racing through the streets at rush hour and more younger people taking mass transit, particularly the bus system, which has had major upgrades in he past three months. Staffers are shuffling through the flat parts of town on fixies. New eateries and wineries, many with a progressive slant, are opening up to serve these newest inhabitants. Two things that haven’t changed: the constant sirens and the mindless crime. My infrequent phone conversations tend to coincide with the passing caterwaul of various emergency vehicles. (As I type, there goes another one. No joke.) I sometimes think text messaging was invented solely for D.C. residents.