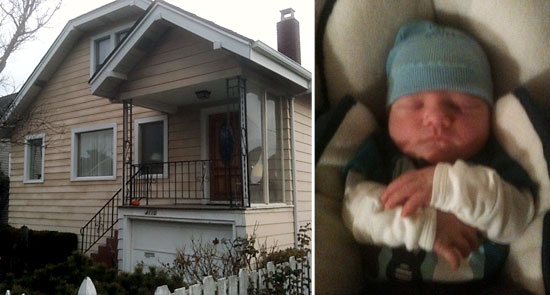 Sunday, December 6
Up bright and early this morning to greet the Kelly daughters, first Tess, then Jane, with what I thought were can’t-miss literary salutations (“Good morning, Tess of the D’Urbervilles”; “Good morning Jane of Lantern Hill”) and received a well deserved non-reaction from each. Which just goes to show they’ve become normal teenage girls, rather than just the precocious offspring of a brilliant singer/songwriter and an equally dazzling painter (which they have always been). I pick up Hanley at the Ross guest house and serenade Joe’s infant son Lincoln with the refrain from Shirley Ellis’ 1965 hit “The Name Game” (“Lincoln, Lincoln, bo-Pincoln/Banana-fanna, fo-Fincoln/Me my mo-Mincoln: Lincoln!”) Not much reaction from this kid, either. Maybe I’m losing my touch with the youngsters. We point the Mini Cooper back toward Portland and hope for the best on the upcoming 50-mile two-lane road out to the Pacific coast. Highway 30 to Astoria has been dusted with snow this morning, and we have to be wary of black ice on the pass that crests around 1,500 feet. I slow down, no doubt pissing off locals behind me who want to go 65 in what looks like slippery conditions. We pull over halfway down the coast at a place called Bell Buoy for the best crab cocktail I’ve ever tasted (“Fresh off the boat,” says the lady behind the counter) and finally arrive at our last port of call, Manzanita, Ore. It’s the unlikely site for tonight’s show at a local watering hole called the San Dune Pub. No one knows why there’s no “d” in San Dune. The temperature has dropped into the teens and there’s a 40-mph wind beating down on us. Sure, this would be a balmy evening if you’re from Edmonton, but to a wimpy bunch of Californians who whine when it gets below 50, it’s pretty miserable. But the sandwiches are good and the show goes down surprisingly well. And the rest room is heated to about 200 degrees. Steve and Melissa have a beach house in Manzanita, and they’ve put the word out among their many friends who have shown up by the dozens. Melissa is overjoyed to find the current edition of the Cannon Beach Citizen is running my press release of tonight’s show as a page-11 feature. When he heard of our final destination, Scott McCaughey had warned earlier, “If there was a gig in Manzanita, believe me, I’d know about it.” But the boys peddled a few of their self-produced CDs tonight and got to play some stuff I’ve never heard them do, such as Hanley singing lead on “Fresh Air,” the Dino Valenti-penned 1970 West Coast AOR radio hit by Quicksilver Messenger Service. We downed a few bottles of cabernet along with a few slabs of local Tillamook cheese to celebrate mission accomplished back at Steve and Melissa’s fab two-story beach place before hitting the sack.