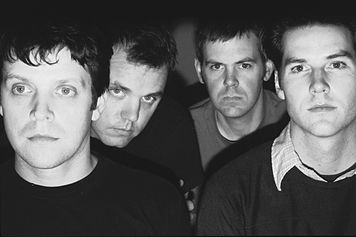 Ed Breckenridge: There hasn’t been another band in my life that I feel had changed or influenced me as strongly as No Knife. Growing up in southern California, I was heavy into the surf/skate world. Much of the music I found in my early teens was from surf or skate videos, which meant that I was listening to heaps of SoCal punk—and not much else. Somewhere around 1994, I purchased a surf video called Focus. I watched this video every day for months straight and knew its ins and outs. I loved it and was completely inspired by it. So much actually, that I wanted to buy every bit of music on the video. The one bit of music I could not find for the life of me was this band No Knife. The song was called “Sweep Away My Shadow.” It was different. It had the energy in music that I loved at the time, but there was something else there. My visits to music stores often resulted in shrugs, and I never had much luck finding any No Knife records. That is, until I stopped by Lou’s Records in San Diego around 1996. Still searching for the No Knife song, I finally found it, but there was no “Sweep Away My Shadow” on the record. At first listen, I honestly felt let down. I wanted new-school punk rock! I wanted to mosh and be angry about parents or whatever 16-year-old kids are into and angry about. This record was not that. I let the record sit for a few months and randomly came back to it one day, and it clicked. This was the band that changed my musical path. No Knife’s music was more intricate. Their combinations of melodic and discordant-weaving instrumental melodies provide a depth and push/pull that many musicians can’t pull off without sounding just noisy. Then there’s also one of No Knife’s most definable traits, which is the percussiveness of the guitars and their use of polyrhythm. Although by description No Knife’s angular textures and discordant melodies would seem hard to listen to, the melodies are actually super sweet and very moving. My love for No Knife only grew with each record they released and opened my eyes to the beauties in music that I had been sheltered from as a “surf punk” teen. I would have to say that their seminal album would be Fire In The City Of Automatons. This LP explored new depths in their music. The songs felt more beautiful, more jagged and more moving than ever before.

No Knife sadly is another band loved dearly by many and unheard by most. I don’t know many musicians who wouldn’t freak out when you bring up the name No Knife. They seem to have influenced many other musical types. A “band’s band.” This is sad because they should have been much more than that, but like many bands trying new and experimental ideas, they were buried under the garbage that becomes commercially successful. They stopped playing in the early ’00s but recently did some reunion shows in 2009 with fellow San Diego band Jimmy Eat World. I was fortunate enough to be off tour and saw them. It was unreal. It was one of the best shows I’d seen in ages. They hadn’t lost it at all. If you haven’t had a chance to check them out, I strongly suggest you do. Video after the jump.

4 replies on “From The Desk Of Thrice: No Knife”

Ed’s description of No Knife is EXACTLY my experience as a teenager in San Diego. Every detail fits. Well said, Ed.

I still wear my No Knife shirt (tattered as it is) with pride. While most kids in the late ’90s learned guitar by playing Blink 182, Nirvana, or Weezer songs… I learned Academy Fight Song… It forever changed my life. I share your sentiment about “Fire in the City…” but a close second is “Downward is Heavenward” by Hum. Thanks for your sharing, Mr. Breckenridge.