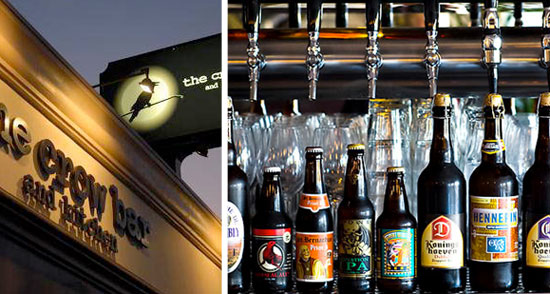 Riley Breckenridge: If you’ve spent any amount of time in Corona Del Mar, Calif., at night, you’d think it would be damn near impossible to find a comfortable gastropub—with an affordable menu, outstanding food, extensive wine and beer lists, an attentive and friendly wait staff—that hasn’t been completely overrun by the stereotypical CDM crowd of upper-crust douchebags, their offspring and the cougars and gold diggers who stalk them. It was damn near impossible until The Crow Bar And Kitchen came along. With a menu rooted in seasonality and pairing high-quality food with beer and wine that compliments it perfectly, a focus on using sustainable agriculture and locally farmed products, and a kitchen that operates with an emphasis on environmental sustainability, it’s truly a step ahead of most restaurants in the area.

When I’m in town, the lady and I head to The Crow Bar at least once every other week for dinner. It’s a place that holds a special importance to us (which I’ll spare you the details of now; you’re welcome), but what really keeps us coming back is the incredible food and service. The beer list features nearly 50 beers (light, medium or full-bodied, draft or bottled), and we haven’t come across one of the 25 wines available that wasn’t worth ordering a second glass. They pride themselves on their delicious brick-oven flatbreads as an appetizer, but we are hooked on the addictive Scottish quail eggs, seated on spicy mustard and garnished with pickles and pickled onions. Thankfully, they only give you three, because I could down a bucket of them like popcorn in a single sitting. Our standby for dinner is the Cubano, which is a panini-style sandwich on a torpedo roll, with pork loin, ham, pickles, mustard, aioli and havarti cheese. It comes with your choice of fries (potato, duck fat or sweet potato) or a side salad. My ever-expanding waistline says to choose the salad, but we usually go with the sweet-potato fries: perfectly cooked, crisp and salty sweet, with a bleu-cheese or garlic-aioli dipping sauce.

Monday night is burger night, where their burger menu is discounted and expanded with a “special burger” each week. My favorite, and one of the best burgers I’ve ever had (and I’ve had a lot; too many, actually) is the Hangover Burger with nitrate-free bacon, aged cheddar and a fried organic hen’s egg (which is also available, fittingly, on the weekend brunch menu.) True to it’s name, it works as a cure for a hangover (and hunger). If I had the budget and metabolism for it, I’d honestly make myself a permanent fixture at the bar, claim a stool as my own a la Norm on Cheers and eat at The Crow Bar every night. It’s just that good and consistent a menu, from top to bottom.

One reply on “From The Desk Of Thrice: The Crow Bar And Kitchen”

This place sound awesome. If you guys are ever in San Francisco, go to The Monks Kettle in the Mission. With 25 beers on tap, over a 100 in bottles, and fantastic food– you cant go wrong. They have the best grilled chicken sandwich I’ve ever had. There is only 4 booths and a couple tables plus bar, so if you want to have dinner– go before 7 or else you’ll have to wait 1-2 HOURS. Worth it though. Cheers.