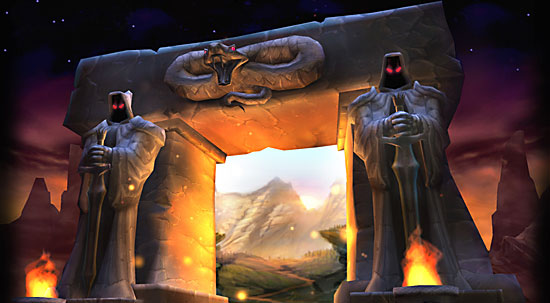 Ed Breckenridge: The best video game ever created is bound to destroy your life. When asked about video games six or seven years ago, I would have told you they were a giant waste of time and that I don’t bother with such things. Enter … World Of Warcraft. This game changed me for better and for worse. If there were anything that wasted more of my time but was great for wasting time, this definitely took the cake. I started playing the game with a few friends who were pretty heavy into D&D as kids and said this was the next step. I was thoroughly interested in delving into such fantastic nerdery. At first, this game seemed simple enough: Shoot lightning bolts at some wolves and pick up gold or cloth (or whatever you find on digital wolves) and gain some experience points to “level” and run around/dance or talk to other online players to help complete quests and find other objectives … As hours tick by.

Well, that was only the beginning. Quickly you learn while playing the game of the cliques or “guilds” that form and social aspects of the game that are similar to the old “chat room” days. People become friends and explore the digital world together building their avatars, flirting or arguing about nonsense … As the hours tick by. The perfect way to get away—and so eerily similar to the metaverse developed in the book Snow Crash. If the regular old video-game questing or social aspects don’t fulfill your gaming needs, there’s the player-vs.-player aspects. Similar to the play style of a game like Counter-Strike. You can run around and blast other players with fireballs, lightning bolts or even slay them with swords. Yep, slay your friends.

There have been many games created that I spent hours and hours of my youth in front of the television attempting to beat the level, the boss, the game! This game is different; it begins where most end, then never ends. As soon as you hit player-level cap, a brand new type of game opens up to you. “end Game” content it’s called. There are dungeons you can explore with others (raiding), killing bosses and gaining items to build your avatar even more … Hours tick … Player vs. player opens you up to battlegrounds … Hours tick … And the recently added team-vs.-team arena matches push Warcraft into the world of competitive gaming. Somewhat similar to a gladiator-style battle until one team is left standing … Hours tick.

The game is beautiful. So much detail has been put into all of it visually, interactively and mechanically. There are factions, there are 10 races and 10 classes to play. Each class and race have special abilities that make them unique. All players can design their characters to a specific playstyle and fit a specific role. To get the full playing experience, it is good to know the abilities that are available and know how they work and what their purpose is. The problem with all this is that it is so damn good and so damn huge that you have to dump hours and hours of your time into it to truly experience its greatness. This means that all the hours spent exploring this beautiful World Of Warcraft are spent sitting in a chair with your eyes glued to a monitor while reality passes you by.

I’ve been playing the game for almost five years now and have gone through periods of the game where I think to myself, “Dear god, what am I doing? Why have I been in my house every night for the past week staring the the computer?” It’s not good. Not good at all. But it’s also the best. I would say I highly recommend this game to anyone with a strong will. Anyone else, stay away. If you have issues with procrastination, stay away. If you struggle with depression, stay away. If you don’t have a job, stay away.

I guess to sum it all up, the best video game in the world can only pull you away from the real world—and without a strong will, this is extremely dangerous. Productivity is way cooler anyhow. Unless you need to waste a few hours in a day, I wouldn’t recommend gaming in general.

4 replies on “From The Desk Of Thrice: “World Of Warcraft””

Eddie! I remember talking to you, outside of Orlando House of Blues, about World of Warcraft for a good 20 minutes. You were telling me how you love to find out the statistics of damage and find out which combination of spells would do the very most damage. Get an add on called DrDamage. It really helps.

Anyways, hit me up if you ever wanna play.

One of the few reasons i stayed away from that game. I read people died from hunger playing this game and that a newborn was neglected to death by two parents who had an addiction to starcraft(another game i steered away from), but i look at gaming the same way as movies sometimes you need to get away from reality and some games actully have deeper meanings than WoW like Bioshock or the MGS saga. I would recommend gaming but in moderation.

[…] the original: From The Desk Of Thrice: “World Of Warcraft” By admin | category: Uncategorized | tags: and-videos, are-dungeons, avatar, avatar-even, […]