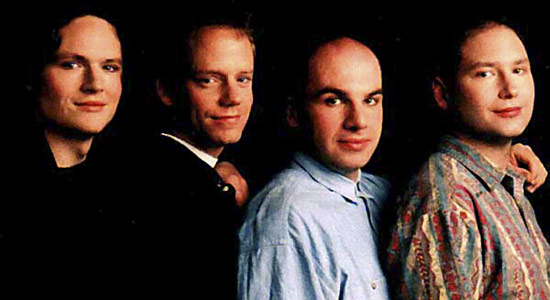 Hey, remember 15 In Philly? Our 15th-anniversary survey of our hometown music scene apparently left a lot to be desired in the variety department. It made our friend Rocco DiCicco ask, “Youse guys listen to anything but india [sic] rock?” (He didn’t actually ask that, but it’s always a good time stereotyping Philadelphia’s Italian-American community.) Every couple of weeks, Rocco tells us about a Philly band that shoulda been bigger than Broad Street.

Cameron Crowe has called Here Comes Huffamoose one of the best rock movies of all time. The low-budget film documenting an unknown band from Philly is, like Huffamoose itself, not particularly marketable or sexy. Tony Ferguson, the Interscope A&R representative who signed Huffamoose in 1997, summed it up best: “It bothered me because I didn’t know where this music fit. It was kind of like a cross between R.E.M. and Steely Dan. I just knew that it was good and that I liked it.” Huffamoose didn’t really sound like either of those bands, but the analogy is not completely unfounded: Craig Elkins’ witty stream-of-consciousness lyrics (widely revered among the Philadelphia music scene and beyond; Counting Crowes’ Adam Duritz was a fan) often reached the brilliance of the soft-spoken Stipe, and the band’s wildly advanced musical sophistication and angular chord voicings often resembled the sardonic jazz/rock duo of Becker and Fagen. (During the first failed effort at recording major-label debut We’ve Been Had Again, the producer Interscope assigned to the band threatened, “If I hear one more fucking jazz chord, I’m walking out of here for good!” Interscope eventually, and grudgingly, let the band produce the record on its own.)

Huffamoose was an unsaleable commodity from the day it formed in 1992. Lyrics so esoteric and literate they required a deep listen, music so sophisticated you couldn’t just pick up your guitar and strum the songs, and a band whose press photos weren’t going to drive the girls wild. Yet it was all so undeniably original and captivating that it seemed Huffamoose would break big regardless. The first single from We’ve Been Had Again, “Wait,” did surprisingly well on triple-A and college radio, and live shows often reached the brink of awe-inspiring.

In the end, the unfortunate question of commercial viability kept popping up: Where did this music fit? Huffamoose was placed on a slew of dates on the 1998 Horde tour, but the musicians’ tendency to stretch out instrumentally didn’t make them a jam band. At the end of Here Comes Huffamoose, we see a boiling cauldron finally explode, as four strong personalities—ones that had been boxed up in a van for two years while touring in support of their major-label release—collided. Drummer Erik Johnson and Craig Elkins get into a long-festering physical confrontation, and Johnson quits the band. While Huffamoose recorded another album (2000’s I Wanna Be Your Pants), it was never the same after Johnson left, and the group disbanded in 2001.

Trailer for Here Comes Huffamoose after the jump.

One reply on “Philly Blunt: Huffamoose”

Huffamoose is without a doubt one of if not the most original and brilliant music projects to come out of Philly. I miss them so, but still listen to all their records at least once a week.