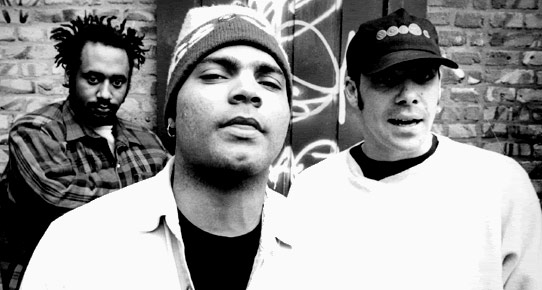 Philadelphia’s live-band hip-hop scene has always seemed more authentic and vibrant in comparison to just about any other city. Much is owed to the Roots for nurturing this scene and for delivering an innovative and eclectic take on rap music that has come to embody their hometown. But everyone who saw the Philly hip-hop scene develop in the early ’90s knows that the Goats deserve just as much credit. After all, they dropped their first album in 1992, a year before the Roots released their debut.

Widely considered one of the great underground hip-hop records of the ’90s, the Goats’ Tricks Of The Shade introduced America to a far more eclectic and inventive brand of hip hop than it had been hearing bumping out of car stereos across the country. The Goats opened up a fiery discourse on political corruption, abortion rights and past American atrocities (two of the MCs were of Native American origin, and one lyric proclaims, “Columbus killed more Indians than Hitler killed Jews/But on his birthday, you get sales on shoes”), but they set it all to a groove that held its own with the best booty-shaking anthems of A Tribe Called Quest, De La Soul and the Pharcyde. Reviews understandably pegged them as a politically charged mix of Cypress Hill and the Beastie Boys (two acts they opened for across the country, in addition to a slew of other huge acts), but their eclectic live band added a unique dimension. While the Roots’ developed a well-honed soul, jazz, funk and R&B pulse to back up Black Thought and Malik B’s effortless rhymes, the Goats’ musical accompaniment went a step further, delivering that uniquely Philly heartbeat but with an intense hardcore and metal attack that brought the music into a singular territory.

1992 single “Typical American” became a minor hit, throwing the Goats firmly into the spotlight. The group eventually signed with Columbia Records for its second release, 1994’s No Goats No Glory. While the Goats continued to hold court on controversial topics, they walked a fine line that showed you they didn’t take themselves too seriously. The Goats wanted to make sure you still had a good time, and they knew how to deliver the whole package in a way that made perfect sense. Song such as “Leonard Peltier In A Cage” weaved together seamlessly with stoner anthems like “Philly Blunts” and “Wake And Bake,” which made way for classic old-school battle raps. In 1994, at the height of their fame and after playing that year’s revival of Woodstock, MC Oatie didn’t show up on the day the band was to leave for a European tour supporting Bad Brains and Fishbone. A few months later, Columbia dropped the band.

The slew of musicians who backed up and recorded with the Goats is a who’s-who of local legends, including Marc Boyce, Jay Davidson, EJ Simpson, Derrick Pierce and Chuck Treece. The music the Goats made is a testament to and emblematic of the uniquely supportive Philly music scene that still thrives today: a hotbed of chameleon-like musicians and MCs crossing over into so many different contexts and delivering authenticity, passion and precision to each type of music they come in contact with. Perhaps Questlove can serve as our ambassador to the world.

5 replies on “Philly Blunt: The Goats”

Tricks of the Shade was also on Columbia via their deal with Ruff House. And yes, this band was ahead of their time. Great Stuff!

Wonder if they guys from The Goats are still around?