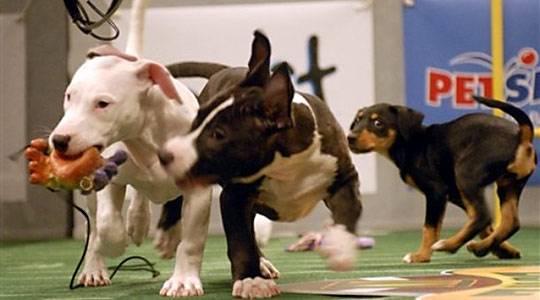 Hatfield: The Animal Planet TV channel airs Puppy Bowl each year around Super Bowl time. It’s a very simple concept, but it’s brilliant: A bunch of puppies are let loose together with toys in a miniature (puppy-sized) indoor model football stadium. Cameras track the dogs’ hilarious haphazard movements while color commentary—the play-by-play—runs throughout in voiceover by a very official-sounding sportscaster. When a dog runs across the end zone line with a toy football in his mouth, it is declared a “touchdown,” and a canned audience roars and cheers. When a puppy relieves himself on the field, it is called “foul.” Puppies run around and around, playing and jumping and skidding and wrestling, and it’s endlessly entertaining. I could sit and watch this for hours and never get bored. Who doesn’t love puppies? Video after the jump.

One reply on “Juliana Hatfield Might Be In Love: “Puppy Bowl””

Hey!! That dog’s got somebody’s spleen! That’s gotta be a 15-yard penalty.