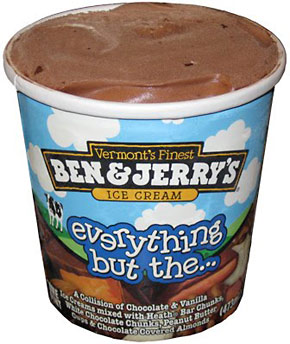 Hatfield: I like ice cream with stuff in it—chunks—rather than smooth traditional flavors like vanilla, chocolate, etc. Ben & Jerry’s Everything But The… has lots of junk in it: white chocolate, Heath bars, peanut butter cups, chocolate covered nuts and probably some other things I’m forgetting. Ben Cohen and Jerry Greenfield sold their company a few years ago, and I really hope the new owners are still using milk/cream only from cows that are not injected with hormones. Otherwise I am afraid I might grow a third boob or something; I have eaten quite a lot of this stuff over the years. (I go through vegan phases once in a while, and when I do go back on the dairy, this ice cream is pretty much the only dairy I eat.) All of my parents’ children are serious ice-cream eaters. I have a theory: My siblings and I are in love with ice cream because none of us was breast-fed. (My mother claims that breast feeding wasn’t fashionable at the time.) We crave that sweet, creamy, comforting nurturing sensation that we never had and will always feel is missing. We are forever sucking on that teat that doesn’t exist. Video after the jump.

4 replies on “Juliana Hatfield Might Be In Love: Ben & Jerry’s Everything But The… Ice Cream”

love ben and jerrys but bluebell is king in texas, i’d like to see a lemonheads flavor

Ooo. You and I could never get along, I’m afraid. I abhore a bunch of crap in my ice cream. Yuck. That’s why I tend to buy more of the H. Dazs brand. B and J is like for 6 year olds. I always try plain vanilla first when trying any new brand. If it’s great, chances are the other flavors will be good as well. Strawberry H. D. recently won best ice cream flavor in SF Chronicle food poll. Yum! In fact the older I get, the more I appreciate the sublime flavor notes of a good vanilla.

i am of the belief that ice cream, at least as far as edible things are concerned, is man’s greatest invention thus far. ben & jerry’s is dangerous, as a small amount cannot just be consumed. if i buy it, i will eat the entire container. i am fully aware of this. it’s a manageable size (not necessarily a comfortable one). so… i try not to buy it. sometimes, though, we all need to allow ourselves to indulge. if you haven’t tried it, i recommend Imagine Whirled Peace. it is a little combination of heaven. (i wasn’t breast-fed either, but i can’t confirm just how relative this is to my intense love of ice cream.)

Talk about disappointment, nothing against Ben & Jerrys, but as I clicked on the video link I thought “wow 12:37 of Juliana Hatfield !!” So you can imagine my, sigh, letdown. I imagine that being out of the limelight is something that you must enjoy now, but just remember that there are still some of us out there that have been with you since you sang “I’m Ugly” which by the way, you never were. Ms Hatfield if you do read this, I hope things are going well for you, and you are missed.