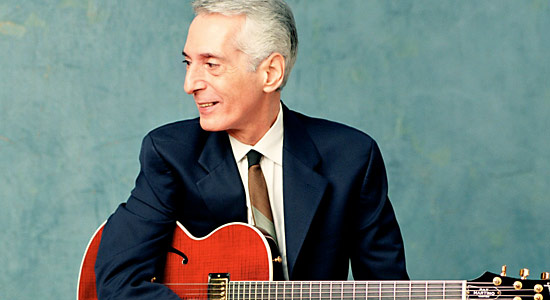 Pat Martino is widely considered one of the most virtuosic guitarists in contemporary jazz. He was born in South Philadelphia and dropped out of high school to begin playing guitar professionally at the age of 15. Still an adolescent, he became heavily involved in the burgeoning Philadelphia pop scene, playing alongside such stars as Bobby Darin, Chubby Checker and Bobby Rydell. These were gigs career musicians twice his age would have done anything to land. But even at this early age, Martino knew his calling was jazz.

Martino moved to Harlem to immerse himself in the “soul jazz” played by masters like Jimmy Smith and Richard “Groove” Holmes. Previously, Martino said, he had “heard all of the white man’s jazz. I never heard that other part of the culture.” The organ-trio concept had a profound influence on him, and he quickly became a highly sought after sideman in the Harlem groove-jazz scene of the ’60s. A revered guitarist by the time he was 18, Martino was signed to Prestige Records as a bandleader two years later. Then, at the pinnacle of his career, Martino suffered a nearly fatal brain aneurysm.

Martino underwent surgery and was lucky to live, but the surgery left him with severe amnesia that stole virtually all his memory of his family, his life, his career, himself. His friends and family convinced him of the impact he had had on the jazz world, and while he gradually understood, Martino had no base from which to pick up the pieces of his career. It’s nothing less than mystical that by listening to and studying his own groundbreaking recordings, he taught himself to play guitar again. He returned to the world of jazz better than ever. Today, Martino speaks about life and art, and performs his music, in a way that seems to radiate only from those who’ve been to the brink, those who truly appreciate being alive and who feel a responsibility to express this appreciation through their art.

Since his return, Martino has been nominated for three Grammys and was voted by Downbeat magazine’s readers as guitarist of the year in 2004. He’s performed with countless jazz luminaries ranging from Chick Corea to Jimmy Smith, at the same time releasing a number of successful and acclaimed albums of his own. But Martino’s interviews in the world’s top jazz magazines usually touch only marginally on his guitar playing. Rather, the topics drift to the importance of artistic expression in all forms, his appreciation of life and how all of it affects his music and daily experience.

Martino has resettled in Philadelphia and continues to push the boundaries of his art with each new recording and performance. Musicians flock to his door for lessons, and he offers not only his encyclopedic musical insight but also the understanding and wisdom of a man who has overcome obstacles most of us could never imagine. In a recent interview, he said, “The guitar is of no great importance to me. The people it brings to me are what matter. They are what I’m extremely grateful for, because they are alive. The guitar is just an apparatus.”

Bobby Darin, born and raised in The Bronx, was never part of the “burgeoning Philadelphia pop scene,” but ever since DL Media (http://jazzpublicity.com/) put that in its bio sheet, which appears on Pat Martino.com, there’s seems to be no stopping the replication of this misinformation. When I called them about it, all their rep could say was, “Thanks for the call.”