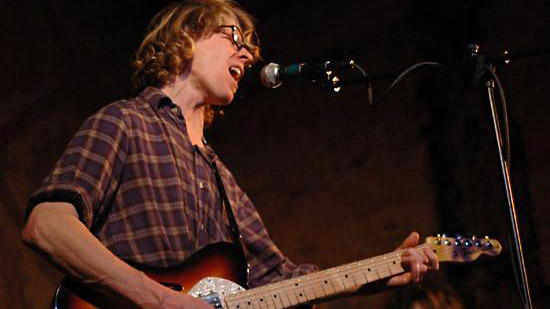 Michael McShane is a true original, in that it’s safe to say there is no one in the world remotely like him. He’s from Philly, but you’d never guess it from his quasi-drawl, rural sensibility and songs that seem to come from another place and time. For the last 15 years, McShane (who goes by Cowmuddy onstage) has been consistently supplying his community with brilliant, touching, well-crafted music that never fails to catch people off guard with its peculiar beauty.

The most rational thing to do here would be to tell you who Cowmuddy sounds like or is at least reminiscent of, but anyone who has heard his music or seen him perform live can attest that any attempt to draw comparisons would be useless. So, here’s a shot. McShane’s music is a wildly unique and modern take on Americana, possibly along the lines of what Neil Young and Tom Waits may emerge with from a year spent holed up in a remote cabin together. Deeply touching and fragile one minute, his music can veer into hilarious absurdity by the time the chorus comes around. While there is no definable recipe, you can hear dashes of Jeff Buckley, pinches of Joseph Arthur and sprinkles of John Hiatt and Frank Sinatra. It’s often bare bones—just a man and a guitar—but it’s his complex, angular vocal/instrumental arrangements that command your attention, giving you the sense that you are watching someone navigate a musical tightrope that only a few—such as Waits and Thom Yorke—dare to walk.

But as McShane’s stage moniker would suggest, don’t take Cowmuddy too seriously. His music is a heartfelt expression of his slightly warped, comical and always endearing take on life. McShane is a brilliant entertainer who works with whatever the atmosphere and setting provides, and this spontaneity ensures that you never know what you’ll get at a Cowmuddy performance. At a recent house show, he floored the audience by climbing up an elevated wooden beam while playing his guitar, then walking along the top of a narrow wall without missing a beat.

McShane’s background as a farmer, carpenter, advocate for locally grown products and devotee to his community has also been hugely influential on his music. He often crusades about the virtues of environmental awareness through his lyrics. But unlike so many musicians who share their beliefs, McShane doesn’t deliver it according to some preachy, predefined template. Refreshingly, he throws glimpses of ideas out there and lets listeners interpret and decide for themselves. His most recent release, Farming Mind, is a moving and deeply engaging distillation of his worldview.

McShane is an omnipresent figure around the city, whether performing at your friend’s house, working the soundboard at The Fire or recording conversations with interesting strangers he meets on the street. He is a fascinating dichotomy: an advocate for rural communities and agricultural development, while at the same time a hardcore Philadelphian who couldn’t be more proud of his city.