To those who loved them, Glasgow, Scotland’s Delgados were the near-perfect blend of churning, indie-rock edginess and stirring, girl/boy vocals, wrapped in gasp-inducing orchestral arrangements that made time stand still. A tough act for vocalist/guitarist Emma Pollock to follow, you might think, when the band split amicably in 2006. And yet, Pollock’s ’07 solo debut, Watch The Fireworks, wasted no time in identifying how crucial she had been to the unique sound of the Delgados. Three years later, the former physics major returns with The Law Of Large Numbers (Chemikal Underground), which goes down like a couple of dry martinis after a savory meal, welcoming you to Pollock’s expanding universe of sound. Pollock will be guest editing magnetmagazine.com all week. Read our Q&A with her. 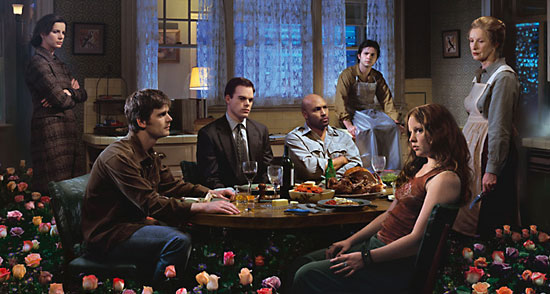 Pollock: I must admit I didn’t take to Six Feet Under straight away and missed it on TV in the U.K., but I did subsequently borrow season two from a friend and was hooked from then on in. The episode called “That’s My Dog” in season four was so intense and engrossing that I was quite shellshocked after watching it. I don’t think there were any other story lines in that episode except that of David Fisher, which was quite a bold move, I think, for a TV drama. Each episode had someone die at the very start, depicted as a set piece, and while it was quite often horribly descriptive and hard to watch, it did break a fair few taboos concerning death and how it is dealt with on TV. The whole thing was quite bold, of course, being set in a funeral home, with the sensitive subject matter dealt with respectfully, whilst not forgetting the wry take on death you would expect from director Alan Ball. Video after the jump.