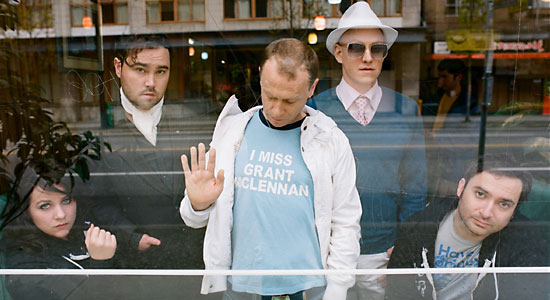 Echo & The Bunnymen had to cancel its U.S. tour dates last fall in support of November’s The Fountain. However, the band has rescheduled and added more shows this spring. Download “Proxy” … Polyvinyl will release No Singles, an out-of-print-EPs compilation by Japandroids, on May 11. The band will be on tour this spring, with performances scheduled at SXSW, Sasquatch and Bonnaroo. Download “Darkness On The Edge Of Gastown” … Stars (pictured) are issuing fifth album The Five Ghosts on June 22. It will be the first release on the band’s new label, Soft Revolution Records. This summer, Stars will play The Five Ghosts in its entirety, along with fan-chosen selections, on its U.S. tour … MG&V is the new side project of John McCauley (Deer Tick), Taylor Goldsmith (Dawes) and Matt Vasquez (Delta Spirit). The band will make its debut at SXSW … Band Of Horses is releasing third full-length Infinite Arms on May 18 (Brown/Fat Possum/Columbia), with the album package featuring the photography of Christopher Wilson, the group’s longtime collaborator. In related news, the Hardly Art label is issuing Carissa’s Wierd‘s They’ll Only Miss You When You Leave: Songs 1996-2003 on July 13. Carissa’s Wierd was Band Of Horses frontman Ben Bridwell’s old group … Bad Religion is celebrating its 30th anniversary with a live album. 30 Years Live will be recorded during the band’s upcoming House Of Blues tour, and it will be offered to fans for free for a limited time on May 18 … Simon & Garfunkel have announced a North American tour this spring, starting at the New Orleans Jazz & Heritage Festival on April 24 … “I Put A Spell On You” is a new single out now in support of Concern Worldwide’s work in Haiti. It’s by Shane MacGowan And Friends—the Friends being Nick Cave, Bobby Gillespie, Johnny Depp, Chrissie Hynde, Mick Jones, Cait O’Riordan, Glen Matlock, Paloma Faith and Eliza Doolittle … The Bride Screamed Murder (Ipecac) is the third album by the current incarnation of the Melvins, and it will be released June 1, with a U.S. tour kicking off the same day … On April 13, Polyvinyl will issue the 15th anniversary vinyl edition of Braid’s first album, Frankie Welfare Boy Age Five. In addition, the band’s sophomore LP, The Age Of Octeen, as well as both volumes of odds-and-sods compilations Movie Music, will also be released on vinyl. Download “Hugs From Boys,” “Movie Clock Star,” “I’m Afraid Of Everything” and “Grand Theft Autumn” … The 20th anniversary edition of Jawbreaker’s debut album, Unfun, is being reissued by Blackball Records on March 30, including the three-song Whack & Blite EP and an unlisted bonus track … Dangerbird Records just signed Vancouver’s Hot Hot Heat and will release the band’s fourth album, Future Breeds, this summer … The Baseball Project—the baseball-rock supergroup comprising Peter Buck, Steve Wynn, Linda Pitmon and Scott McCaughey—has partnered with ESPN.com for the Broadside Ballads project. The band will write and record new songs and offer free downloads each month during the 2010 baseball season. Download “All Future And No Past” … Sharon Jones & The Dap-Kings are releasing fourth full-length I Learned The Hard Way on April 6 via Daptone Records.