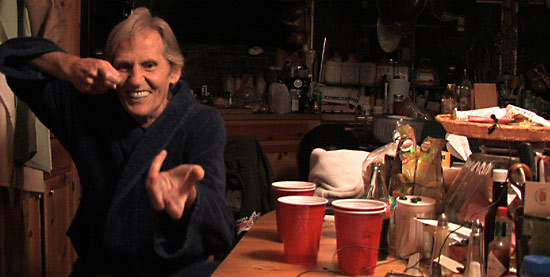 MAGNET’s Mitch Myers files his second round of notes from the SXSW Film Conference And Festival.

The film fest is lumbering along at a steady pace. In many ways, it’s running smoother than ever, with plenty of cool venues and an inordinate amount of supportive services. The SXSW Interactive Conference is also in full swing, and its number of attendees has doubled since last year, reaching nearly 6,000—eclipsing the turnout of the film festival as well as the music fest that starts on Wednesday. So, it seems that technology is the new rock ‘n’ roll even, if the city’s overburdened bandwidth has been choking off many a smartphone and wireless connection. But as popular as it all is, some folks have forsaken the festival this year. Quentin Tarantino and Eli Roth were big no-shows for a horror-director panel, leaving the massive crowd of disappointed fans to query Robert Rodriguez and the guy who made Zombieland. Ouch.

As always, the documentaries are a huge part of the film festival’s programming, but so far there hasn’t been that one standout film to galvanize the crowd and create a real buzz. Good thing for the Alamo Drafthouse venues, where you can at least eat food and drink beer while watching movies. The Alamo is probably the most progressive film venue franchise in America, and I only wish that they had one in my hometown of Chicago. Screw popcorn and candy, I want fish tacos and a San Pellegrino when I’m watching a flick.

Thankfully, the bountiful Alamo hosted the premier of Ain’t In It For My Health: A Film About Levon Helm on Saturday, which helped pass the time as the documentary lagged occasionally. Not that Helm’s life story is boring, far from it, but rather than delving deeply into his years as drummer, singer and driving physical force of the Band, this film focuses on his more recent rebirth as host of the midnight “Rambles” on his Woodstock farm nearly every weekend. The film shows Helm post-bankruptcy, struggling with serious health issues and the aftermath of his battle with throat cancer, which left his magnificent voice a vulnerable and sometimes unreliable commodity. The scenes of him receiving medical treatment are tough to watch, but lend great insight into his current situation. While not a biography, we are given great access to Helm’s daily life and professional pressures, but are left to make our own conclusions about his past.

At age 70, Helm is finally being recognized as a respected elder of Americana, and his last two recordings have been critically acclaimed. In the film, you can see him and guitarist Larry Campbell working on song arrangements and leading their band of devoted musicians. You can even watch Helm smoking pot with Billy Bob Thorton, but too many highpoints of his illustrious career are glossed over or completely ignored. Campbell speaks to the long running feud over publishing royalties that has left Helm bitter and estranged from his former Band mate Robbie Robertson, but Helm himself is less than forthcoming on many personal issues.

Ultimately, one has to read Helm biography This Wheel’s On Fire in order to appreciate the enigmatic musician depicted in this film. An unrepentant party animal with a history of drug problems, he knows the price of having a good time, struggles to keep the family business going and has yet to relent. Still, this is what happens when the subject of a documentary has a little too much influence over the final product—lots of access, but the movie presents a lot more questions than it answers.