Portland, Ore.-based Miles Kurosky is what old-time journalists used to call a “great quote.” He’s one of the few interview subjects you’ll find in the music biz these days who’s totally unafraid to step on a few toes to get his point across. And he’s got the musical chops to back up his shoot-from-the-hip posture. Kurosky’s previous band, Beulah, was a true California original, good enough to catch the ear of pop genius Robert Schneider of Apples In Stereo, who released the first Beulah album under the banner of the Elephant 6 collective. As is the case with other creative one-man shows (Grandaddy’s Jason Lytle, for example) the transition from band to solo career is as simple as painting a new name on the office’s glass door. The Desert Of Shallow Effects (Majordomo) is every bit as exhilarating as anything Kurosky has ever cut. Kurosky will be guest editing magnetmagazine.com all week. Read our brand new Q&A with him and more about Beulah. 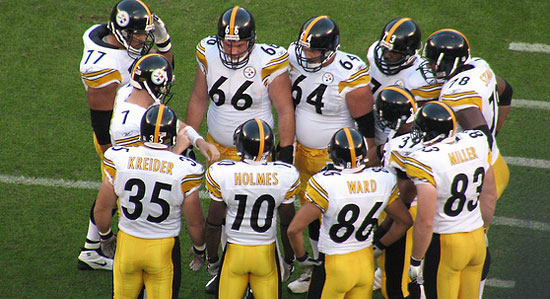 Kurosky: Since I’m a musician and because I’ve lived in two very liberal cities, you can imagine what a dinner party is like with my friends. If not, just go to Stuff White People Like. In red-state lingo, it’s “a bunch of tree huggin’, bleeding-heart commies talkin’ a lot of elitist bullshit.” In a certain sense, old Jeb would be right. Conversation does revolve around movies with subtitles, articles in The New Yorker, the evil that is Fox News, trips to Europe and all sorts of obscure tidbits about unknown musicians, artists, writers, etc. I really don’t mind it. I mean, I do have a couple erudite bones in my body, so I have no problem keeping up. However, if this shindig happens to be on an autumn Saturday evening, I usually need to cut out a little early. When I’m leaving, someone will inevitably ask the question, “Why?” If I’m a little drunk, I usually respond with, “Because it’s football season, bitches, and tomorrow is not the Lord’s day, it’s Art Rooney’s day, and if I don’t get to my Steelers bar by 9 a.m., I’m not gonna get a seat, which means I have to go to a non-Steelers bar, which is really gonna piss me off.” Usually this response is met with silent incredulous stares, but eventually someone will pipe up in that condescending tone, “I can’t believe you like sports,” followed by an even better, “Football is so dumb. It’s the lowest form of entertainment in the world. It’s so barbaric.” Oh, the snobbery. It seems some people still divide the world into geeks vs. jocks, no matter how far removed they are from high school. I think they should be a little more European in their outlook. Sport is more than a spectacle over there; it’s a civic unifier for both the rich and poor, and the source of great pride for geeks and jocks alike.

My granddad Nikolai came to this country in the early 1900s from Russia at the age of 10, with eight other boys of the same age. He became a child laborer and worked in the steel mills of Pittsburgh the rest of his life. My father, like so many other Yinzers, left the city looking for work when the mills closed during the ’60s and ’70s. When he left, he took with him a very unique accent, a love for chipped ham and an absolute obsession with the Pittsburgh Steelers, which he passed on to me. As crazy as it sounds, I really think the Steelers are one of the reasons I’ve become so close to my dad over the past 15 years. After each game, we talk for a minimum of an hour, unless, of course, we lose. Then it’s more like 15 minutes. Either way, I treasure those moments.

If you ever feel the need to join a cult, go here.

All good people love The Steelers