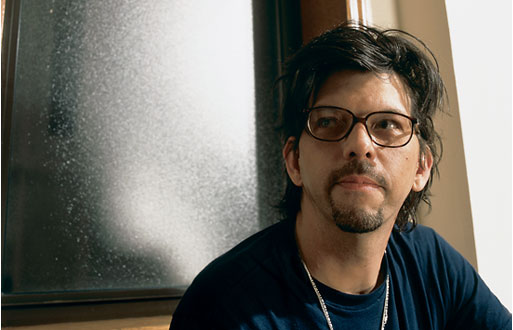 MAGNET’s Rocco DiCicco eulogizes Sparklehorse‘s Mark Linkous, the incredibly gifted and troubled singer/songwriter who committed suicide earlier this month. Read the story we did on Linkous in 2006. Photo for MAGNET by Brennan Cavanaugh

Maybe it was the shocking and violent way he left this world. Or the realization that such a beautiful, poignant, stellar body of work was so prematurely concluding. Or the regret that you never got to see him perform live. Or just the sadness of such a singular artist deciding that he couldn’t live another day. There were countless reasons why so many of us were deeply affected when we heard that Mark Linkous (a.k.a. Sparklehorse) had fatally shot himself in the heart March 6 outside a friend’s home in Knoxville, Tenn. I’m sure that, like me, many of his fans across the world have been listening to his music non-stop over the last week and a half. While this is usually the best way to pay your respects and make peace with an artist’s passing, in this case it only seems to make you feel the loss even more intensely. This is because you always catch something new, inventive and beautiful every time you listen to Linkous’ music. And in the painful remembrance of his eccentric brilliance, it dawns on you that no one will ever make music quite like this again.

Linkous’ career began with both huge promise as well as huge tragedy. His first tour was supporting Radiohead in 1996, after his astounding debut, Vivadixiesubmarinetransmissionplot, caught the band’s attention. But on the London stop of the tour, Linkous overdosed on a mix of alcohol, Valium and antidepressants in his hotel room. He collapsed with his legs pinned beneath him, remaining in that position for almost 14 hours. After his body was lifted up, his heart stopped for several minutes. He was treated at St Mary’s Hospital in London, where much of the inspiration for his swirling, intimate second album, 1998’s Good Morning Spider, came from. Masterly produced by Linkous, the album perfectly wove together his moving, dreamlike songs with his increasingly revolutionary sonic voice, drawn from the modern and vintage gear that he became such an obsessive collector of.

Three years after Spider, Linkous released his masterpiece, It’s A Wonderful Life. One of the most compelling albums of the 21st century, it was also Linkous’ personal favorite. From the beautiful strings/mellotron-laden “Gold Day” to the gripping and intimate “Apple Bed” to the pummeling rock of “King Of Nails,” this was an album of unquestionable creativity, sonic innovation and boldy surrealist songwriting. It brought Linkous a whole new legion of devoted fans, as well as near-universal admiration from critics and musicians around the world. As a result, Linkous found himself keeping only the best of musical company. His collaborators became the most distinctive musical luminaries of his day: Tom Waits, PJ Harvey, Danger Mouse, the Flaming Lips and Thom Yorke, to name just a few. In Linkous, they saw a kindred musical spirit, a production genius, a soft-spoken Southern gentleman and, most importantly, a pure and groundbreaking artist.

After several years of battling deep and all-but-handicapping depression, Linkous treated his fans to 2006’s excellent Dreamt For Light Years In The Belly Of A Mountain and an international tour. He also continued working with and producing innovative music for others. His collaboration with Danger Mouse, Dark Night Of The Soul, is scheduled to be released this summer after a protracted legal dispute with Danger Mouse’s record label.

In the end, maybe it wasn’t that much of a surprise Linkous killed himself. And maybe the odd and violent way in which he left this world was expectedly unique. But it doesn’t make the loss any less crushing. What we are left with is his brilliant music, which like so many great artists before him, may end up being discovered and revered by a larger public more than it was when he was here. And that is a good thing. A whole new group of people will connect with something unique, something that makes them feel like their hope, pain, love, hate, fear, insecurity and joy is understood. Because Linkous felt it, too. Whether he was whispering it in our ears or screaming it in a hail storm.

Very nice. You are dead on about non stop listening to the music. He is already missed tons. My wife and I were lucky enough to see them live in 1998? (Good Morning Spider tour). We drove 5 hours from St Louis to Lawrence, KS and it was worth every mile, minute and penny. He was such a nice guy after the show too.

One in a million he was. We painted a few houses together long, long ago and he played me a demo cassette tape of “Someday I Will Treat You Good” on lunch break. I was dancing in my painter pants and splattered boots it was so good. Mark moved slower than anyone I ever met but got everything done….including leaving an eternal signature across my heart with his eerie, sweet, mysterious and beautiful music.

speechless…..having lived with suicide
in family already and facing my own
attempts….i am deeply saddened and terribly
depressed over this great loss of genius talent
…..you know i’ve had my own struggles with
depression and suicide….but i have a child…
i’m a mother….it’s hard when your mother
leaves you this way…..i should know…

it’s so hard to understand and accept quickly….
there will always be questions….and they
will never be answered as only he knew…
no need to speculate…..