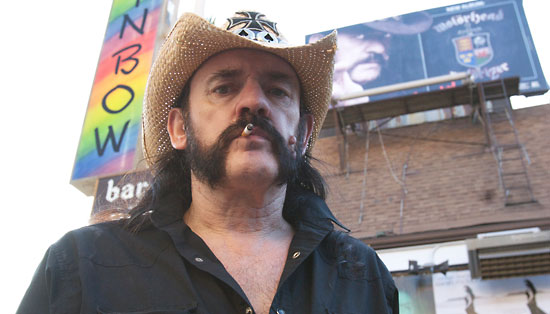 MAGNET’s Mitch Myers files his fourth round of notes from the SXSW Film Conference And Festival.

It was just another full house at the Paramount Theater in Austin during SXSW, and the man of the hour was none other than Lemmy Kilmister. Without resorting to hyperbole, Kilmister is rock ‘n’ roll. As the leader of Motörhead for the last quarter century, the bassist/singer has been unrelenting in his life, liberty and pursuit of happiness, which apparently still has a great deal to do with sex, drugs and rock ‘n’ roll.

Featured documentary Lemmy is a true and accurate testimonial that features a number of friends and fans paying tribute to the walking one and only. Dave Grohl, Metallica, Joan Jett, Slash, Ozzy, Alice Cooper, Henry Rollins and many others insist that the Motörhead brand is a definitive and overwhelmingly influential hybrid of heavy metal, punk and thrash like no other, and that Kilmister is the living embodiment of all things good and true in the world of rock. All the ecstatic testimonials sound a little contrived at the beginning of the film, but by the end there is no doubt that it’s true. Lemmy is the man.

Not only that, Lemmy is a simple man; give him some booze, cigarettes and a video game and he can sit like Buddha for hours, days or weeks. He’s a British-born expatriate who’s been living in L.A. for decades and fits right in with the Hollywood rockers, actors and porn stars. According to the film, when Kilmister isn’t on tour, you can find him at the Rainbow Bar & Grill, but just don’t bother him until after he’s had a few Jack-and-Cokes. The documentary does a good job giving you his history as a roadie for Jimi Hendrix as well as his years with the Rockin’ Vickers (from the mid-’60s) and his formative time with quintessential space rock band Hawkwind before being fired for preferring speed and booze instead of acid and grass.

There are plenty of live performances showcased here, and we all get to sing along with “Ace Of Spades” a few different times. The Motörhead lineup has been quite steady in recent years, and guitarist Phil Campbell and drummer Mikkey Dee were also in attendance at the Paramount. Basically, styles and fads in music evolve over time, but Kilmister’s blueprint has remained virtually unchanged. He doesn’t pander, and the rest of the world has slowly caught on to the originality and single-minded vision of Mr. Kilmister.

At 63, he is a wise and uncomplicated man surrounded by friends, family, roadies and band mates who are somehow feeding off of the world that he has created for himself. And don’t let the fascination with Nazi regalia fool you—Kilmister has a heart of gold. He’s also an original rock ‘n’ roller who has outlived almost everybody he once knew. And he is still going strong.

Wise and uncomplicated is an accurate way to describe Lemmy. His interviews are always honest and informative, without any irritating pseudo-intellectual gloss to water down his message. There’s not a ton of active (and relevant) over 60 rock and rollers left today, and it’s important not to lose a connection to Lemmy and his brethren. Look at the present day Rolling Stones for counterpoint; 30 years into their non-stop karaoke tour, raping fans for the privledge of saying “I saw the Stones, dude!!”.