Dengue Fever is anything but your average indie-rock combo. Based in Los Angeles, the exotic six-piece outfit is fronted by Chhom Nimol, who sings in her native Cambodian dialect, backed by guitarist Zac Holtzman, his brother Ethan (keyboards), Senon Williams (bass), David Ralicke (horns) and Paul Smith (drums). Some photos of the boys in the band from their three previous albums look like they’ve come from Homeland Security’s no-fly list. In reality, Dengue Fever may be the best U.S. cultural ambassadors to Southeast Asia since the glory days of jazz stars Louis Armstrong, Duke Ellington and John Coltrane 50 years ago. The band’s “new” album, Dengue Fever Presents Electric Cambodia (Minky), spotlights vintage performances by its favorite Cambodian artists from the late ’60s/early ’70s. Dengue Fever will be guest editing magnetmagazine.com all week. Read our Q&A with them. 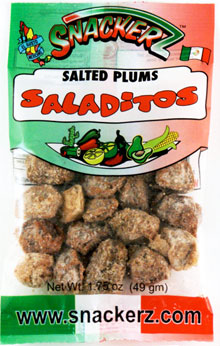 Paul Smith: These little salty dried plums are definitely one of the stranger snacks out there. Saladitos are found in both Chinese and Mexican markets, not to mention most ice-cream trucks, and they are a token of my childhood. I used to use my whole allowance to buy four packs of these little gems, and although I no longer get an allowance, I can still eat quite a few in one sitting. Most people make crazy sour faces when attempting to eat them, which is fun to watch. I must get some kind of macho rush out of being able to power through them without the involuntary facial movements. Try them some time. I dare you.